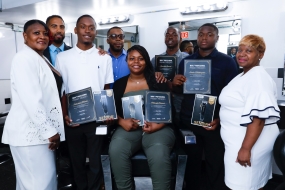 A few months in to the Wahl Fade It Forward program, the chosen students have found that the support from UCAN, a Chicago social service organization, has given them a leg up at His & Hers Barber School.

“The four-week mentorship program prior to starting class gave me a head start on cutting because I learned about everything in the first five chapters of our textbook prior to classes starting. It helped out a lot,” said Andre Whittington.

Now in their fifth month of the 13-month program, Mikayla Harper, Andre Whittington, Quientin Crump, and Sebastian Moore, are able to fully understand the benefits of the Fade It Forward program. Wahl’s Fade It Forward Mentorship Program presented each mentee with a full scholarship to His & Hers Barber School, a mentor and the continued support of UCAN. The Wahl Fade It Forward Program was created when Wahl Education & Artistic Team (W.E.A.T.) member Garland “G-Whiz” Fox and a few others began to think about how they could give back to the community. They decided to find some at-risk youth that need a chance and give them an opportunity.

“Wahl really wanted to truly affect people’s lives with this venture,” said Lance Wahl, Global Vice President – Professional Products, Wahl Clipper Corporation. “We know that to really succeed in this industry, you need to have a strong foundation. The mentors that Garland and UCAN found for these students are really helping them grow as professionals and people. When you combine the mentorship with the strong school system that His & Hers provides, it gives us high hopes for their future in this awesome industry.”

Initially, the promise of a scholarship to attend His & Hers Barber School gave the students the most excitement. As they’ve gotten more into the ins and outs of barbering, having a professional mentor on call has been a great help.

“I have reached out to my mentor for a lot of customer service questions. I had a client that wanted me to do something different than what they had described to me, so they got mad at me. I went back to my mentor and asked them what to do to handle those situations,” said Sebastian Moore.

The partnership with UCAN provides the students with transportation and community assistance. The students know if they need anything, they can reach out to UCAN and get support. His & Hers has also given the students an opportunity to give back to their community by arranging back-to-school cuts for kids in need.

The students are on track to graduate in August 2019. With the confidence from the Fade It Forward program, the students look forward to graduating, getting into the work force and eventually becoming mentors themselves.