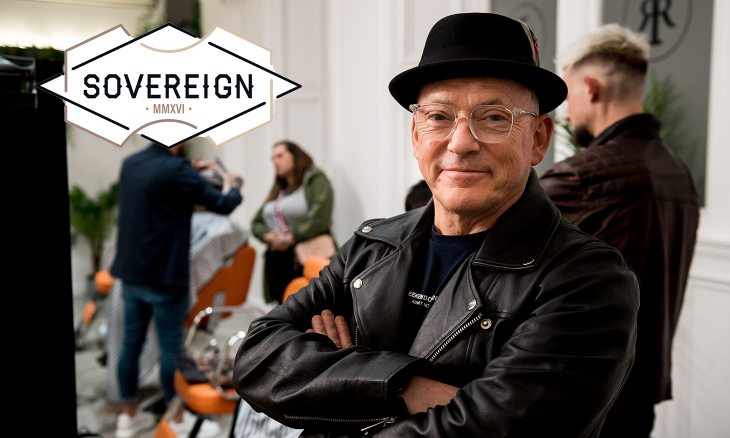 A Scots pensioner is returning to his roots to take up a career in barbering – four decades after first picking up his clippers.

Refusing to fade away, James Cleland, 66, will train under top barber Kyle Ross after joining the latest in-take of students at the Sovereign Grooming Academy in Glasgow.

In a varied career, James, from Uddingston in South Lanarkshire, has sold homes for an estate agent, hit the decks as a DJ, had a spell as a disco dancer in Benidorm, and at one time owned a pub and a café.

Self-employed for the last 30 years, James is now following his dream of putting a mobile hair salon on the road and has signed up to retrain as a barber at Sovereign Grooming’s academy.

Sovereign’s sought-after intensive course equips students with the qualifications they need to become a barber in just 15-weeks.

James said: “Some people will wonder why I’m starting out on a new career at 66 but I like to keep busy and I’m definitely not ready to retire. I might be a pensioner but I can’t sit in the house, it’s just not me. You only have one life – live it.

“I had a two-year spell as a barber when I was in my 20s and it has always been a goal of mine to return to the industry. I’ve been putting it off for a while but it’s finally time to take the plunge and follow my dream.”

James in investing up to £35,000 in a custom-built van which will be fully accessible to disabled people. He plans to visit retirement homes and elderly care facilities and will also be available for haircuts and grooming services outside gyms and at office and workplaces across South Lanarkshire.

James added: “The course at Sovereign Grooming Academy was absolutely ideal for me. To be qualified in just 15 weeks is ideal and means I can hit the road in my mobile van as soon as I finish the course.

“I barbered 40 years ago and have done a bit of hairdressing in my time. More recently I did a stint in a homeless unit cutting hair for free to get some experience – but now I am getting familiar with ‘long cuts’ and fades and I can’t wait to get started properly.”

James is one of 36 students who will graduate each year at the academy which was founded by award-winning barber Kyle Ross.

Kyle said: “We’re absolutely delighted to have James as a mature student at the Sovereign Grooming Academy – it really highlights that you’re never too late to chase your dreams.

“We’re committed to giving our students the best possible experience and by passing down all the tips we can to James, we can hopefully help him on his journey of starting his barbering van.”

To find out more about the Sovereign Grooming Academy, please visit; https://sovereign-grooming.com/academy