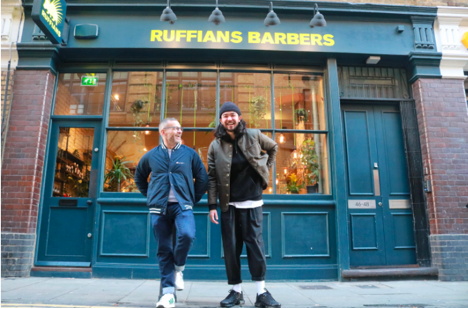 Ruffians is heading to New York City and they’re bringing their best-of-British barbering A-game with then… and they couldn’t be more excited about it!

With six years leading the revolution in men’s barbering and grooming in the UK under their belts, they are bringing the Ruffians experience on those unsuspecting yet discerning Big Apple punters.

On announcing the news, Andrew Cannon, Ruffians co-founder, said:“Almost exactly five years ago, we launched Ruffians in Covent Garden – bang in the centre of London. Since then we’ve expanded with stores in some of our favourite areas: Marylebone, Soho and Shoreditch. People love what we are doing, and this has been recognised in all the awards we’ve won along the way. But we have always wanted to push the boundaries, so we’ve decided to dip our toe into international expansion – and where better to start than New York?!”

So, on Saturday 15th December, Ruffians New York City will open its doors for one day only – thanks to their friends at O.N.S Clothing. O.N.S are hosting our pop-up barber shop in their menswear haven in the heart of SoHo, the most exciting and dynamic shopping district in the city. “Teaming up with O.N.S was a no brainer for us. We love their mindset and culture, and we believe they complement Ruffians perfectly. Their Soho store is beautiful – it’s the perfect launchpad for Ruffians in the USA. We could not be happier to be teaming up with them to bring our award-winning British barbering to the States!”– Andrew Cannon.

O.N.S customers picking out party outfits and Christmas gifts will also be offered the full range of Ruffians services including haircuts and trims, beard tidies and facials. They will also be able to enjoy a bottle of the signature Ruffians pale ale while their barbers get to work doing what they do best!

The pop-up will be hosted by Ruffians’ Creative Director Denis Robinson, who brings years of experience at the top of British hairdressing, and Ruffians Shoreditch manager and all-round superstar Tommy Cunliffe – previous winner of the British hairdressing’s Rising Star award. Both of whom are incredibly excited to be representing Ruffians in the US:

“I’ve been to NYC for work many times, but there’s something hugely humbling about being chosen for Ruffians’ first foray into North America. As well as the pop-up shop which will be a great learning experience and lots of fun, we’ve also got some exciting editorial shoots lined up, so it’s going to a full-on few days”. – Denis Robinson, Ruffians Creative Director.