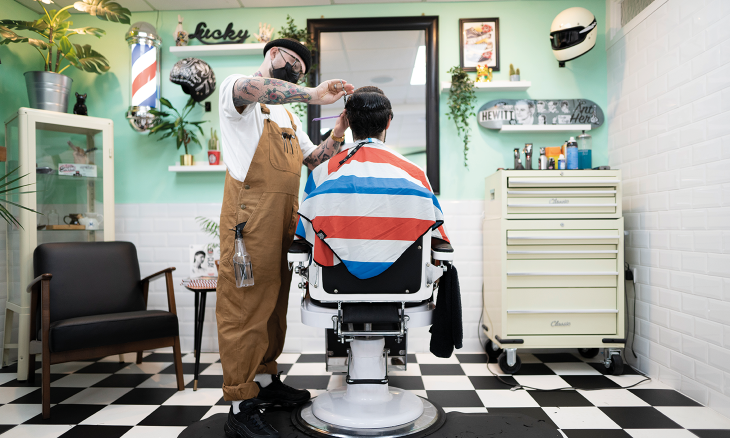 The Uppercut Deluxe Barber Ambassador Team is made up of the very best barbers from across the globe, with each Ambassador passionate about the industry and devoted to the craft.

Charlie has been on the radar of Uppercut Deluxe for over four years, gaining attention as a young barber with natural talent, but Charlie had been interested in the brand for even longer.

It was when Charlie sat in the chair at an Uppercut Deluxe popup and purchased his first tin of Monster Hold that he decided he was going to pursue his interest in Barbering and take up the trade.

From there, Charlie’s passion was ignited as he dove into the history of barbering and began cutting hair, a passion within him was ignited and hasn’t since slowed down.

Charlie has proved that hard work pays off; from first gaining attention, to becoming a member of the Uppercut Deluxe Collective and now moving into the Ambassador team.

“Charlie’s passion for the industry is second to none,” said Uppercut Deluxe Founder Steve Purcell.

“Charlie first got our attention a few years ago just tagging us in photos, and his raw talent was unmissable.

“When we first introduced the Collective Charlie was a no brainer. Since then, Charlie has always jumped at everything thrown at him and gone above and beyond for the brand.

“That attitude, his passion for the industry and then, of course, his skills behind the chair make him a really natural fit for our Ambassador team.

“Charlie is a welcome addition to our team, and I am beyond stoked to have him on board.”

Charlie’s shop, Lucky Sevens is a mix of old and new, he has taken his favourite elements of the classic American Barbershop and combined them with modern touches like bright lights and vibrant colours.

The shop is really a reflection on Charlie and his style, a guy who pays respect to the past but isn’t afraid to put his own spin on things.

The same thing can be said about Charlie’s approach to cutting hair. He is a master at ‘modern classics’, cuts that are inspired by classic 40’s style but bought into the 21st century with extra volume, texture and a softer finish.

Devoted to the industry and beyond passionate about barbering, Charlie Venn is a valued addition to the Uppercut Deluxe Ambassador team.