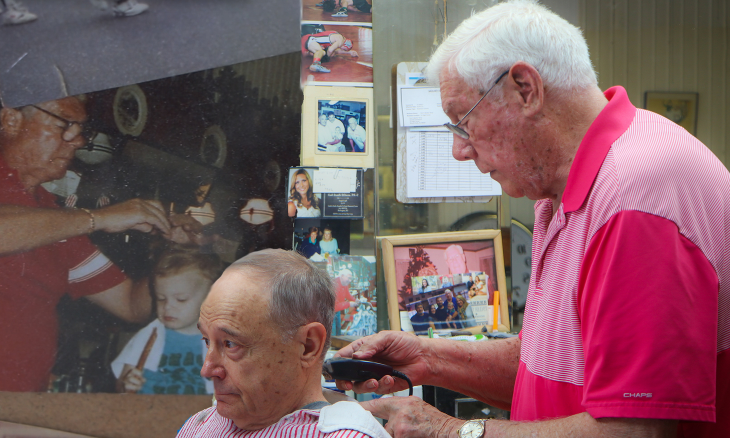 One of South-Jersey’s most well-seasoned barbering establishments will finally close its doors after over six decades of service to its community.

Donald Thompson, who has been cutting hair at Don’s Barber Shop for 64 years, says “I enjoy what I do. So consequently, I didn’t really consider this a job”.

Don started his career in 1954, starting as an apprentice as under the tutelage of local barbers, and after starting up his own store 1957 many of his clients would follow with him.

“I’ve got lots of good people and they’re friends, they weren’t so much customers,” he added.

Carl Shaw, who has trusted Thompson with his hairstyle since he was a child, and a very loyal friend and client to the shop says “He cut my dad’s hair. I came here as a little boy. We’ve been friends ever since,” said Shaw, who is 70 years old. “Don was in the Army and I was in the Air Force, and so, we talk a lot about the service.”

Don’s Barbershop houses many, many trinkets and collectables, and history buff Shaw has always found them to add to the allure of the shop, making it a museum of sorts and stable of the town in so many ways.

Mr Thompson says “I enjoyed it, and people knew that I enjoyed it, so a lot of people contributed to me,” he said. “Old telephones, old shaving mugs, antique bottles, pictures, a little bit of everything.” He continues “I’ve sold probably 75-80% of what I had already. We had 15-20 people a day come in here and buy things.“

Having worked all of his life, Mr Thompson hopes he can finally enjoy the spoils of retirement however he does know himself, and has stated he will get “clipper itch” and has already been offered part-time work another establishment.

“Time flew and I don’t have any regrets about going here in the first place,” he said. “I was very fortunate and very happy and my children were happy. A nice life.“