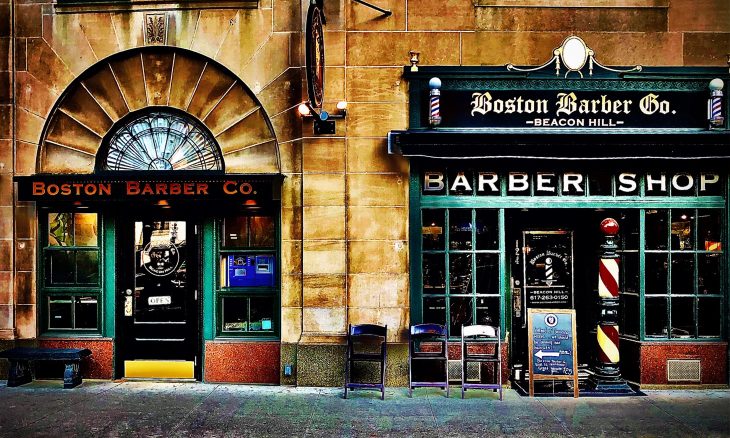 The Boston barber who accidentally stabbed himself with scissors in February has recovered from his injuries and returned to work.

Steve Silva, who cuts hair at Boston Barber Co. on Beacon Hill. said: “I’m happy to be back, it’s good to see my customers and everyone I work with.”

Silva, 30, who lives in Wilmington, was cutting a customer’s hair at the barber shop on Feb. 12 when he slipped and fell on his scissors.

“The floor was a little wet from me spraying the kid’s hair…and my foot went off the mat and kind of slid away.”

Trying to break his fall, he landed heavily on the pair of shears he was holding, and the scissors plunged into his chest.

At first “I didn’t know I stabbed myself,” he said. “It didn’t hurt too much.”

Silva was bleeding heavily, and his co-worker Sarah Santiago rushed over to help him.

“Sarah, she grabbed paper towels and put pressure on it,” he said. “My customer laid me down.”

Silva said he could have died because the scissors “punctured the sack that your heart sits in” and if they “went in any further, I would’ve actually hit my heart muscle.”

Silva had to undergo open heart surgery at Massachusetts General Hospital. He spent about a week in the hospital (at one point, he was in the intensive care unit) and it took him about a month and a half to recover from his injury.

Silva is now back to working at Boston Barber Co. three days a week.

Silva said he was grateful to Robert Dello Russo, the owner of Boston Barber Co., for being so supportive and for helping him out while he recovered from the accident. “He texted me every day,” he said.

He’s also thankful to everyone who donated to the GoFundMe fundraising campaign that was created on his behalf, and for all the well wishes and messages of encouragement that he’s received.

“I’m just grateful for the support,” he said.