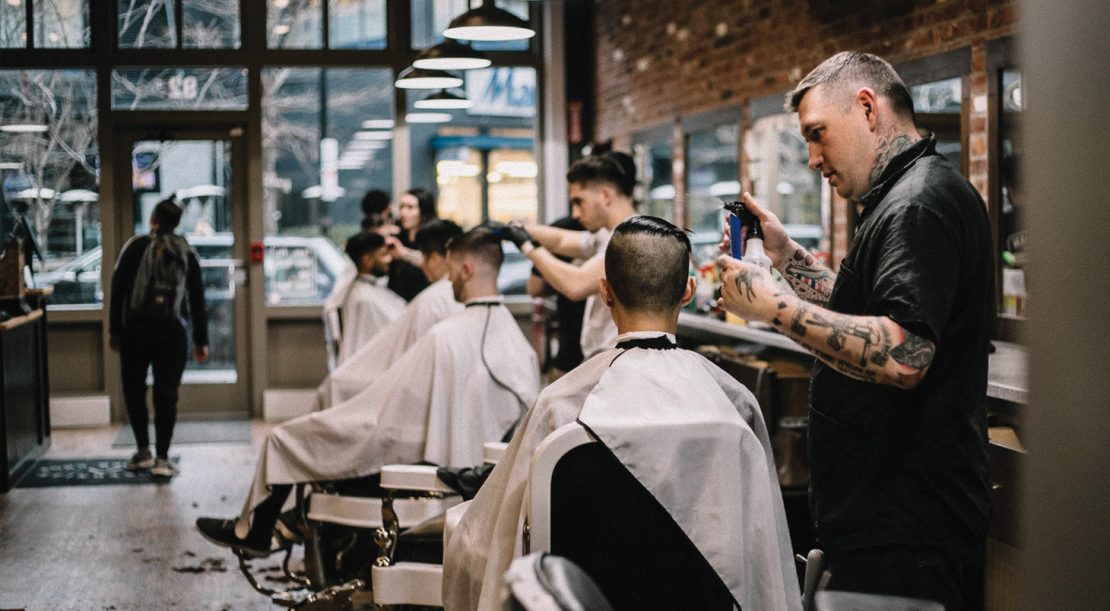 As featured in issue 2 of BarberEVO North America – June 2018.

Bostonian Barbershop has become an institution and cornerstone of community in its local neighbourhood. CEO Erik Zaiatz discusses opening a barbershop that would have made his grandfather proud.

“My grandfather was a barber for over sixty years and had cut four generations of some families. I remember what it was like hanging out there when I was younger, seeing him interact with his customers, hearing the stories and even noticing the smells, the aftershave, the talc… I just love being there and there wasn’t really anything like that around here” says Erik.

After ten years in the making, the first Bostonian Barbershop opened in the summer of 2014 and was a family affair. Erik convinced his sister, a hairdresser, to return to barber school and with now manager Matt Penardi on-board, he opened shop in an old Bostonian shoe factory forty-five minutes south of Boston. With the help of his father and uncle, Erik renovated the space and quickly made quite an impression on the local community.

“We made a big splash when we opened the shop” he admits. “With our barbers, it’s all about attention to detail. They take their time whether it is a haircut, shave or beard trim. If you are trying out a new style, they are going to take their time and make sure you leave happy. We were one of the only shops doing hot towel, hot lather, straight razor shaves for some reason.”

Gentlemen would frequent the shop for decidedly gentlemanly cuts. At the time, local shops were churning out regular fades and line-ups but Bostonian offered the expertly coiffed pompadours and hard parts that were a swooping trend at the time. Each were set in place with a dollop of Bondafide Pomade, who have endorsed the shop since 2014. The barbers loved the products and both Erik and Lewis had a surprising amount in common from an early age.

He explains the meticulous attention to detail which led to patrons driving an hour in each direction for a cut and waiting times grew from a palatable thirty minutes to two to three hours. A few more stations were added to alleviate the waiting times but Erik quickly realised expansion was needed to another city. He had noticed the Fenway neighbourhood was lacking in barbershops and opened a larger store in the image of his first two years ago.

Still flooded with clients, Bostonian’s Whitman shop was recently relocated half a mile down the road to a 3000 sq ft space. It also allowed Erik a much larger workshop out back for the barber chair restoration, chair building and wood working he does for the shop. Bostonian’s CEO lost count after his first thirty barber chairs but his collection is quite considerable. The new space that tends to over one-hundred gents a day is simply stunning.

“The interiors of our shops are new world meets industrial” he says. “All the chairs are from the same company and are like one-hundred years old, 1906/1910. A lot of the décor is from that time too. We have hard floors, exposed pipes and brick walls. I love collecting antiques and we display them up in the shop. A lot of the décor is my grandfather’s. I have a lot of his old straight razors, dusters and hand clippers from his time barbering.”

Community has been a cornerstone of the brand since their inception. Despite expansion, waiting times at the shop can be as long as two to three hours on some days, four for particular barbers. The shops are not understaffed; they are just hugely popular. Bostonian operates a queue check system that gives an estimated time and locals can put their name down, go home and jump right back in. Erik explains the shop’s loyal patrons do not mind the wait.

“I think is cool to get your haircut at Bostonian,” he says, conscious to not sound arrogant. “A lot of people wear it as a badge of honour, they seem proud to wait. I mean, nobody wants to spend three hours waiting but this is their shop and these guys are their barbers and they wait because they will get a perfect haircut every time. We do a lot for the community, we sponsor kid’s sports team, donate to different charities. We have a great relationship with the community, we love them as much as they love us. It’s great!” he smiles.

Boston may be small but it is certainly not lacking in sports teams. The Red Sox, Celtics, Bruins and Patriots all call the city home. New England Patriots’ Gillette Stadium is just twenty-five minutes from the Whitman store but due to Boston’s infamously bad traffic, most players live in Rhode Island. A few do live in the city and visit the Fenway shop. Recently retired linebacker Jerod Mayo is one of the more well-known players who comes in twice a week for his work as a pundit.

“We have a few hockey players that come in when they are in the area. Fenway Park, where the Redsox play, is only a stepping distance away. A foul ball could probably hit our door. We have cut a bunch of them, they all live in the neighbourhood and play a lot of home games. A few of the more well known players, Steven Wright and Craig Kimbrel, we cut in the clubhouse. We cut a lot of the away team players too in between practice and warming up.”

Erik plans to use the impressive size of the new, old shop to bring the East Coast barbering community together. The West Coast is renowned for its barbering link ups but Erik say it’s not as prominent on his side of the country. He plans to extend the Bostonian’s idea of community and host regular barber socials for up to two hundred professionals and barbering students to share ideas. “We have space, we can accommodate, so we want to bring that together,” he finishes.