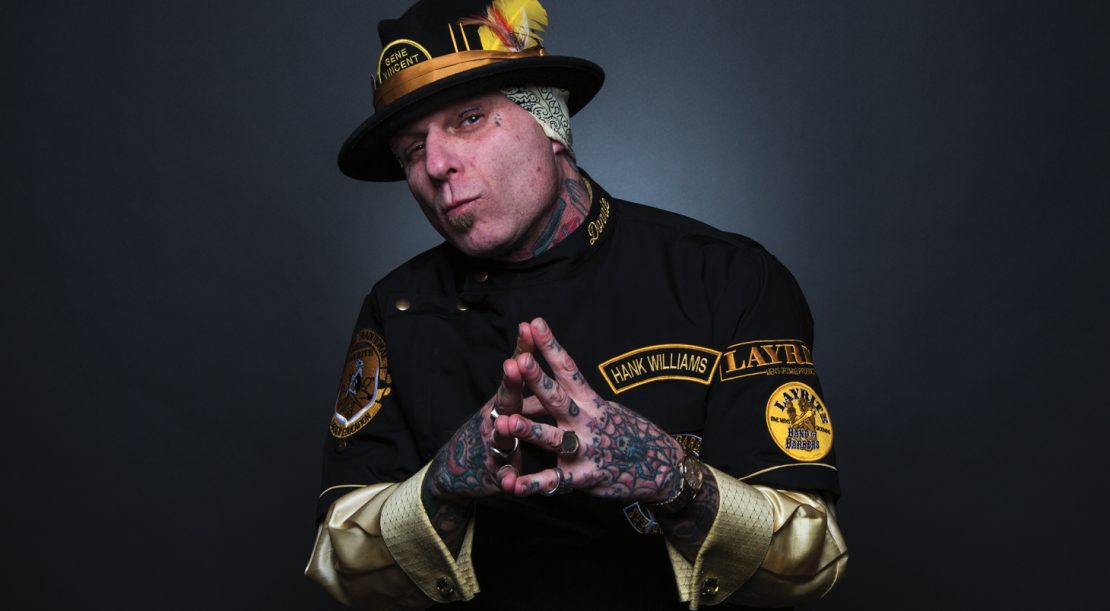 Classic cars, thumping rhythms, the girls and of course the hair. Each were integral to the nineties rockabilly scene that birthed one of the industry’s most well known products, Layrite. The brand’s enigmatic owner, much like the brand itself, oozes Californian charm.

The barbershop, for many gents, is a rite of passage and a first glimpse into
manhood. “l thought it was really special, you know,” says Donnie Hawley from behind his rose-tinted shades “Back then they had the Playboys in the drawer and l would see the older guys pull them out, and, you know, the old coke machines, I’d throw a dime in , pull the bottle and pop the top and kind of feel like a big boy when I was young.”

Donnie would have his first cutting experience at age thirteen, etching Mohawks for his cousin’s football team before the charmingly dubbed “hell week.” He went to train as a barber after being hurt in a factory incident but later dropped out to make some money. While in Barber College, however, he heard of a guy called “Bricks that was in the same school in a different city.

I heard about this guy who had Elvis tattooed on his whole back and I wanted to meet this guy because he was into rockabilly and I thought I was the only rockabilly cat around. He was going to Rosston in Anaheim, I was in Long Beach and I ended up meeting him at the Palomino, this honky-tonk club in North Hollywood and I met him and told him I wanted to be a barber too and I’m real good. The rockabilly scene was so small at the time and he was like, I’m already opening a shop’ and totally
discouraged me.

Donnie, however, saw that the craft of barbering was dying out and knew he had to act. Much like in the UK, everything was unisex and the classic styles were in danger of being lost in the annals of history

“You’d drive around and barbering was vanishing. We’d see old guys sitting in the barber chairs by themselves reading the newspaper and something just clicked. I’ve got to save it man. I’ve got to do my part. I need to be the guy, the voice, the person that brings barbering back”.

To do so, he returned to school to get his barbering license and opened Hawleywood’s Barber Shop in 1999. Keen to buck the unisex trend, Donnie created a male-only space that Al Capone would have been at home in. Rich woods, cream walls. Of course, there was no social media at the time so Donnie returned to his beloved seen to get the word out.

I had to set up at shows to get myself out there and my first card and combs had my pager number on them, and I’d hand the combs out at shows, rockabilly, punk rock shows and people would start paging me at tattoo shops and there would be like twenty guys there. I started cutting hair in the back of Bert Grimm’s Shop at the Pike in Long Beach, the oldest tattoo shop in the United States. I was in car clubs so I’d cut their hair. I was cutting hair in the back of Classic Tattoo with Eric Maaske and he was a traditional tattooist who had a lot of famous guys come through his shop. Guys in Rancid, Social Distortion and Stray Cats, so I got to cut a lot of those guys hair and started making a name for myself.

All these experiences are key to understanding the Layrite brand. The product, much like Donnie’s barbering career came from necessity, only this time he needed the right product to style the slick backs and flat tops with fenders he was looking to save.

Layrite started because I was messing around making my own pomades, coming out of the rockabilly greaser scene. I had really curly hair, super curly hair, so I couldn’t find anything that I could get that big pomp with that would wash out. The stuff we had available was Butch Wax and petroleum-based products. It seemed like it would never wash out. If you didn’t style your hair right the first go around you weren’t able to wash it out and start over, you know what I mean?

Unfortunately, his first concoction wasn’t as practical as it was authentic. Not only were classic cars part of the scene but quite literally a part of his solution. When changing the rear main seal on an old Packard, Donnie thought the oil residue that may well have been there for thirty/forty years – had the consistency of a potential product.

I grabbed a mason jar and scooped as much as I could into it with some Vaseline and some Old Spice and some other things and rocked up to the show with it in. It worked but the only problem was my friends and I thought we were so cool because we were wearing grease that was actually from a car, but the girls were like, ‘dude you guys smell way too much like a garage. Way too much. It’s cool you’re greasers but you smell’. That was my first go at messing with pomade because of my curly hair.

Unperturbed, Donnie went back to the drawing board and continued his ad hoc approach to achieving the slick styles of the times. He eventually found the perfect mixture, that would later be christened by one, a similarly curly-haired client.

I started mixing ingredients that I thought would work and wash out. And I had a customer with similar hair to mine and I would have to use hairspray, round brush roll the curl out and I would put my own product in his hair and he was like, ‘man you’re the only person in my whole life that’s been able to get my hair to lay right.

The year was 1999, a good few years before social media came along. Layrite quickly gained a loyal following and people would drive for hours to pick up the product from the shop; at this point Donnie wasn’t shipping it. He was, however, pedaling the wildly popular at festivals and shows within the scene.

“You know, I started putting it in my own cans and taking it to shows, backpacking it in, sneaking it through with my band friends so they could get it backstage and throw it to the crowd. I would set up in coat closets, I would go to music festivals and set up at punk rock shows, rockabilly events. I would be asked by musicians to style their hair before they went on stage at shows. I brought my products along everywhere I went and gave it away. I started making my own shirts and gave those away”

Other than his tireless self-promotion, Donnie attributes the product’s success to just one simple attribute: it works. He had found a problem through experience and created a solution. They do say imitation is the sincerest form of flattery, but the Layrite founder explains that many have tried and failed.

“I just had to make sure it performed. All these years later, there have been a lot of people that love Layrite and they take it and they try to copy it and they’re not even barbers. They’re four booths down at a show that I’ve been doing for fifteen years or more, and it looks like my product – same bottles, same packaging and it doesn’t work. It’s not made to perform because it was not made by a person that knows hair, knows barbering, knows products, knows what works and what doesn’t.”

He continues to reflect on the manner in which he stumbled across the best-selling formula “It took a long time. I accidently made Layrite. The ingredients in it allow you to wear it and wash it out. It was out of necessity because my friends would come in and they had grease in their hair. I’m not going to name names, but petroleum based products were all we had and I couldn’t get my clippers through it. I wanted to do the best haircut possible and it was preventing me from doing that. I remember when the right mix came around and I was able to wash it out, cut through the haircut perfectly and put the pomade back in. I never dreamed Layrite would be what it is.”

Donnie is now a bona-fide star in the barbering community. He’s travelled the world with both his brands – Layrite and Hawleywood’s Barber Shop, opened a shop in Australia and even had a film made about him. All this work, however, has been underpinned by a genuine love of the craft and wanting to preserve the art for future generations.

“It’s all traditional. I don’t use the word fade. It’s three outlines; everything is shaved with a razor. It’s very important for me to keep this trade of real barbering and to distinguish the difference between a barber and a stylist, because there is a difference. I feel blessed to have inspired so many. It’s been a wild ride, man.”