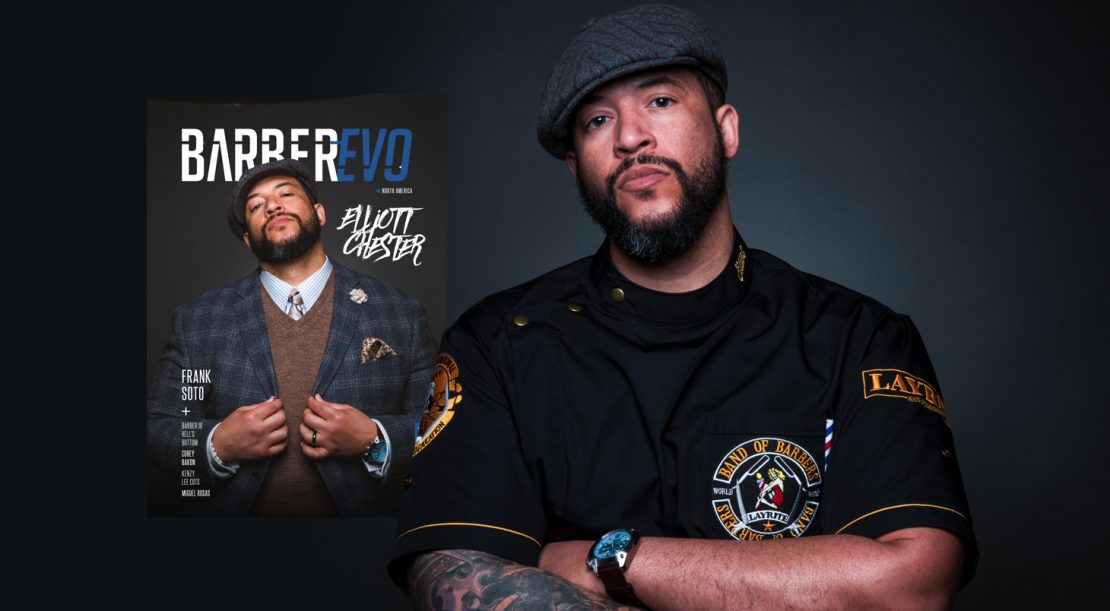 HAVING BEEN IN THE INDUSTRY FOR OVER 20 YEARS, IT’S SAFE TO SAY LAS VEGAS-BASED ELLIOTT CHESTER HAS A WEALTH OF EXPERIENCE UNDER HIS BELT. BARBERING IS SO INGRAINED IN ELLIOTT’S WAY OF LIFE, HE BARELY REMEMBERS A TIME WHEN HE DIDN’T HAVE A PAIR OF CLIPPERS.

“I’ve always been a barber; my step-mom’s sister was married to this cat that cut his own hair, so there were always clippers in the house, so I just started cutting my own hair, my friends, people on the football team.”

As time went by, Elliott started taking regular trips to the barber with his dad, and in his sophomore year he was expelled from school for having his nickname shaved onto his head, despite the fact that a fellow student did the same thing and instead of being kicked out, his was considered ‘team spirit’. This led to a discrimination lawsuit against the school board, which became such a big deal in Arizona – where he was based at the time – that it was turned into an editorial cartoon in a paper.

The impact of the case drove him to become the barber he is today. “Not only through my hairstyle was I speaking up for my right to be different, but also my right to express myself, and it taught me that how you show yourself to the world is such a powerful thing.” After finishing school and spending some time in the local music scene, he needed a new direction and the one constant for him was his love of cutting hair. “I went to barber college in Bakersfield, California, and that was it, I just dumped all of my energy into it and it was something I became so passionate about.”

Bakersfield became his stomping ground for the first eight years of his career after graduation, working in salons where barbers worked alongside hairstylists in a shared space. Feeling limited by the small, conservative style of the town, Elliott started driving to and working weekends in Las Vegas where a friend of his owned a barbershop. “In Bakersfield I was charging $12 a cut, but in Vegas we were charging $20, so almost double, plus sometimes you’d get a $20 tip, so the move was a no-brainer.”

After working in his friend’s salon for just over a year, he read a salon magazine article about a barbershop in Caesar’s Palace (Truefitt & Hill), on the Las Vegas strip. “I had never seen anything like it, the barber chairs were beautiful, the barbers were all dressed in suits, they just looked dope…to me it was what barbering was supposed to be.”

Elliott, wearing shorts and a t-shirt at the time, immediately went out and got himself a suit just so he could feel adequately dressed to go into the shop and introduced himself as a barber and luckily, they were hiring. The master barber met him and offered him the opportunity to audition, which was, unsurprisingly, quickly followed up by a job offer, which turned into a year of incredible experiences.

From there, he was recruited by another barbershop on the strip, ‘The Art of Shaving,’ where he stayed for two years. “I really used that period as a time to learn and discover the style of barbering that I do, which is really catering to a higher-end clientele. It was like going back to school again and it made me realize what I wanted to do, which is when I stretched out and opened up Elliott and Company in December 2007.”

The shop, located just 15 minutes from the Las Vegas Strip, takes inspiration from the old-school, traditional barbershops of the early 1900s. “I didn’t want it to be a throwback, I wanted to have those elements, but a modern representation of that.” Designed to be a welcoming space, rather than having all the chairs on one side of the room, the four chairs were across from each other to create open communication and group culture.

For Elliott, being a barber is about running a good business, to have a positive effect on the community and provide a great, relaxing experience. He has built up a diverse range of talented staff that reflects his wide client base so that everyone feels represented and welcome. “It’s not about me, or my shop, it’s about the customers, those guys are the stars, not me.”

“I made a conscious decision to put the retail section directly across from the seating areas so that when customers are waiting, they are looking directly at the retail products we offer, so they can maybe take home a piece of that barbershop experience with them,” Elliott explains, and this attitude to business has served him well as a Layrite ambassador.

“I had heard about Layrite before I met Donnie. I was introduced to the Layrite guys by Jay Majors at the International Beauty Show in Vegas and we hit it off real quick. I was looking for a good product line that I could really stand behind and I knew the history of Donnie and it meant a lot to me as a product line because a barber made it, it came from the barbering world. I wanted to support a product line that supports us as an industry, and the product works, Layrite Original Pomade is a staple.”

Establishing that relationship with Layrite meant a lot to Elliott because they understood what was going on in the barbering industry because they themselves were deeply entrenched in it.

“I was always really flattered if they asked for my feedback on products like the Natural Matte Cream or Cement Clay, you know they cared about my opinion. I just kept begging them for a decent shampoo and conditioner, not some ‘guys are lazy’ 3-in-1 bullshit, a real quality product and they listened and came out with a great shampoo and conditioner. Honestly, every product in their line is dope and it works really well, I use it every single time.”

Elliott was lucky enough to be in on the ground floor when Layrite began building the Band of Barbers with people like Jake Shipwreck, Kenny Duncan and more. “It was much more than just being sponsored by Layrite, it was a bunch of folk who really believe in education and in helping to grow the industry, so when they extended the invitation I was beyond honored. It’s the greatest professional honor of my career.”