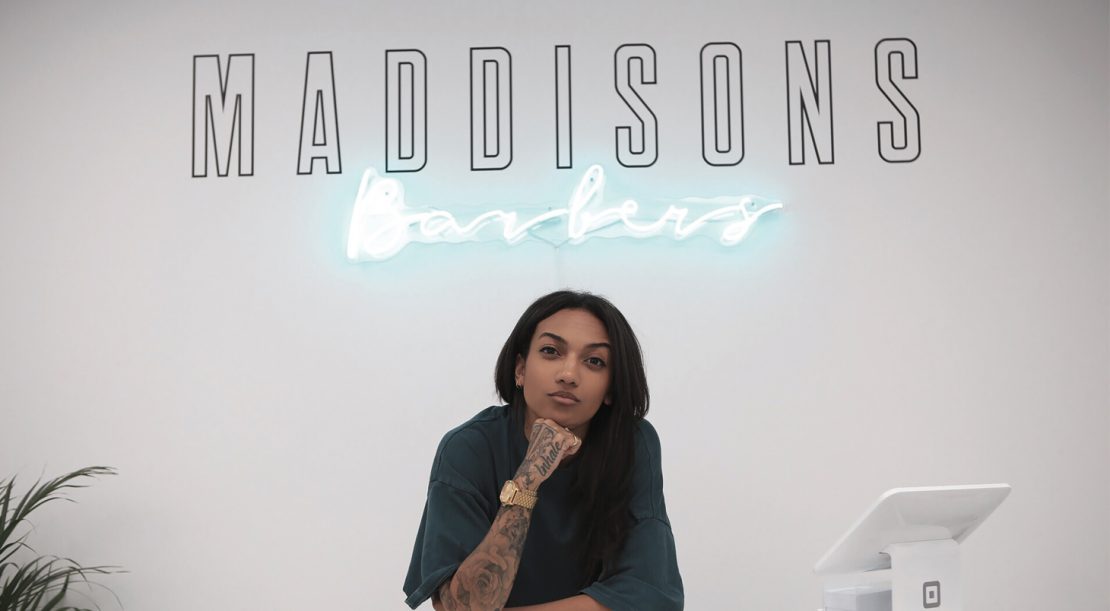 WHEN TALITHA MADDISON GRADUATED FROM UNIVERSITY, SHE KNEW HER LIFE WASN’T GOING TO BE BEHIND A DESK. FIVE YEAR’S LATER, IN JUNE OF 2019, SHE OPENED MADDISON’S BARBERS IN HER HOMETOWN OF REIGATE.

“I’ve always found hair and fashion really interesting creatively,” explains Talitha. “But only men’s hair and only men’s fashion if I’m honest. Even now, my wardrobe is just a bunch of men’s clothes dressed up with my make up!”

Talitha started her barbering career back in 2014, but had been out of the industry for over a year before opening Maddison’s Barbers: “I burnt myself out. I completely fell out of love with it and my tattoo studio businesses were taking off so I threw myself into those.”

In early 2019 though, Talitha started to get excited by the work on other barber’s Instagram pages and she began to feel that same joy she felt when she first got into barbering. Luckily for her, she regularly has agents calling her up when new shops become available and when one cropped up where she lives, she felt she had room to express herself in the men’s hair world and couldn’t turn the opportunity down.

The shop is family run – given that it is her family name above the door, everyone gets to feel involved, even Talitha’s 4-year-old nephew, who carries a business card around with him because he knows the shop has his name on it. There are currently three chairs in the shop and keeps the services offered fairly simple.

“I wanted to keep the price list short and sweet, so there’s only one type of haircut that covers everything, one type of beard trim and then we have a ‘Face Works’ service which is a hot towel treatment with a face mask and a quick eyebrow wax. We use Triumph and Disaster skin care range for this service which are great.”

When it came to designing the shop, Talitha took a lot of inspiration from shops she had seen in California, Australia, Japan and Dubai: “I wanted a light, stripped-back, minimal but masculine look. Clean lines, and a rigid colour palette of white, black, grey and light blue. I was very strict on this one; it needed to have an adult vibe but still chill. We had stuff delivered and sent back so many times, it all had to fit. I’m obsessed with neon signs, I think they add so much to a bare interior.”

The look is part of the shop’s charm, and it definitely stands out on the high street, with its white walls and neon sign. It certainly doesn’t look like anything else on the high street and you can’t help but notice its slick style. More important than the look though is the sense of community that Talitha hopes to create at Maddison’s.

“I’m really trying to encourage the guys that come in to communicate with each other. I do the same at the tattoo studios, I like for people to engage,” explains Talitha. “With the younger, more shy guys that come in, it’s really important to push them to talk to someone who might be in at the same time or to me, it’s about social skills. I’ve only been open for a few weeks but already a few young men have come in and talked about their mental health, which is great. I hope they feel like it’s a space to do so. I don’t know what it is about being a barber – everyone tells me everything!”

Talitha’s welcoming attitude and openness has led her to not only run three successful businesses, but also to become an ambassador for New Zealand-based skin and hair care brand, Triumph & Disaster: “They approached me in 2016. I used the products on my face after the meeting at Thy Barber and was sold straight away on the ethos and the quality of the products. I really respect Dion Nash, the owner, and Phil, who runs the UK side of things, he helps me out a lot.”

Asked which product from the range was her favourite, she said it is hands down the Rock and Roll Suicide Scrub.

“It’s insane. Dion says I’m only supposed to use it once a week but I use it way more than that – I’m always asking them to send me some more! My boyfriend is always nicely stocked up on the hair products and he loves the moisturiser.”

Looking to the future, Talitha still has a lot of hopes, some as simple as get a dog, others more challenging, like buying a house or watching Arsenal have a decent season whilst cutting hair in the new shop… more importantly, she’s ready to relax – three businesses in three years; it’s no wonder she’s exhausted.