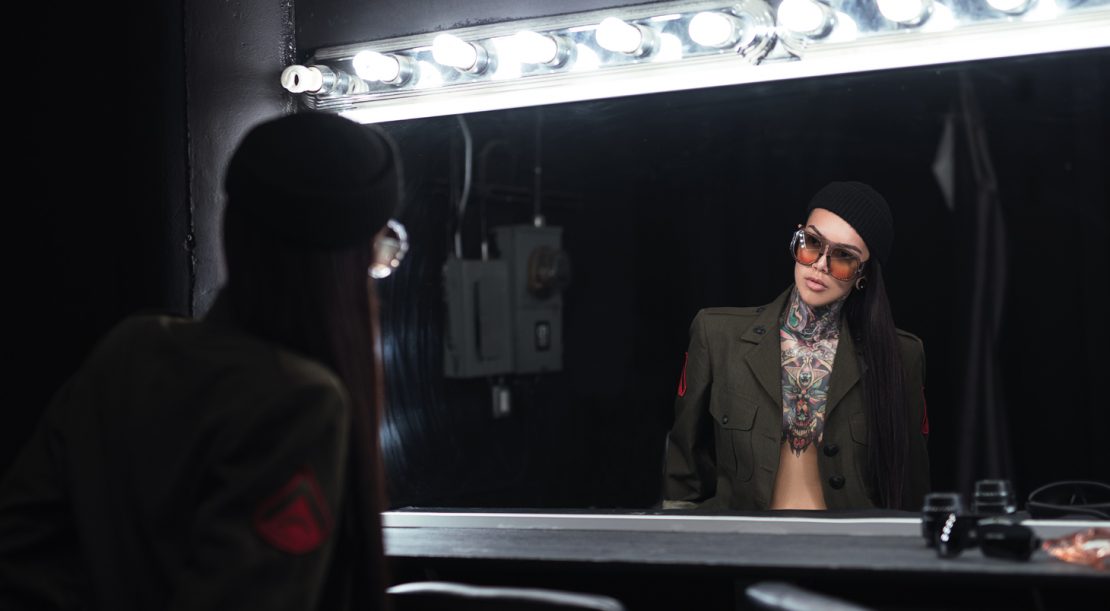 ANYBODY THAT CLAIMS TO BE ‘JUST’ SOMETHING IS UNLIKELY TO BE SUCCESSFUL. IT STIFLES AMBITION AND SIGNALS AN ACCEPTANCE OF ‘THIS IS IT’. FOR YEARS, THERE WAS A CERTAIN STIGMA ATTACHED TO THE HAIR INDUSTRY AS A DESTINATION FOR THE LESS ACADEMICALLY INCLINED. POPE THE BARBER, HOWEVER, DOESN’T HAVE TIME FOR SELF-DEPRECIATION, NOR ANYBODY’S BULLSHIT.

Despite her moniker, she isn’t just a barber; Pope is a brand. She is also a businesswoman with big, big plans. Her feats are made more impressive as her life, she explains, was heading in a very different direction.

“I played basketball and I had a scholarship,” she explains, perched on the steps of her Santa Ana shop, Vatican Barbershop. “I played basketball in school and we travelled with the men’s team and all my friends would be cutting their own hair and it looked fun to me. I got good at it. I went to a predominantly black school and I was like the white girl that could cut – I mean I’m not even white – but it was fun. I didn’t think it was going to be a career for me, though.”

Her dreams of playing in the WNBA, however, were crushed after a serious car crash left he unable to walk for a year. Such a period of revaluation was difficult for not only Pope – who at the time was at school for aeronautical engineering – but also her parents.

“I went to cosmetology school on crutches. It was the scariest thing telling my parents. You know, I’m not a mathematician; I would love to cut hair. I hear it all the time, but you know what? That’s what gives everybody drive. That’s the first person that says no. It’s the nature of the rebellious barber or stylist. That’s the triumph; that’s the payoff,” she smiles.

And, judging by her extensive body art, Pope is well versed in acts of defiance. Buddhist imagery and symbolism wraps intricately around the majority of her body, so much so that if you asked her how many tattoos she has, she would probably answer just three. The second – etched on her ribcage and Pope’s first ever tattoo – reads ‘all I am I owe to my mother’. Try being angry with that, mother. The third is a dagger inked on her left cheek that is indicative of her approach to life. She’s all-in at all times and incorporates her passions into her individual brand.

“There really was no job title for what I wanted to do,” says Pope. “I wanted to travel, I wanted to do this and that. I wanted to do everything really. That’s what a brand is. You can have everything you like, do whatever the hell you want. I was barbering, hosting clubs and tattoo modeling and all that. I tried to marry the two. I started getting pretty popular in the nightlife and I wanted people to know me for barbering.”

Pope, eager to focus on building, put herself in a self-imposed creative exile. And what better place to do so than Notorious Barbershop? Not only is it fucking freezing, thus curtailing partying, the Montreal-based shop has incubated some of the industry’s most well-known brands and has quite the esteemed list of alumni.

“I learned so much from being there and around people like Famos, Chink, Thad and the Maison Privée boys. We all learned what we needed to learn and all opened shops. We all knew what we wanted to do: we wanted a home base and wanted to travel. We bounced ideas off each other and pushed each other to grow. We were all doing merch at the same time. Famos would come out with a hat, and I’d be like ‘I need to do a beanie!’” she explains.

Quebec’s largest city is known for attracting a smorgasbord of creative talents seeking its nurturing environment. From clothing designers to videographers, Pope and her Notorious peers could tap into the city’s tightknit creative community and collaborate to help grow their brands.

“I wanted to translate that to out here – people just bettering each other. LA is a type of spot where there are just haters everywhere. I’m not one of those people and I don’t want to be around those people. I wanted to come here with a clean slate and build my own team of everyone: videographers, clothing designers, barbers. I took a lot from there. I met my wife there.”

Despite her relatively young age, everything, from the outside at least, seems to be falling into place. Pope has a thriving female-fronted barbershop, a beautiful wife and travels doing what she loves. Pope’s success comes from her single-minded determination and bullish attitude that most successful people possess. It hasn’t been easy. It never is, and Pope certainly doesn’t mix her words when giving her two cents on overcoming adversity.

“I grew up against every social norm. I’ve seen it all. Being a female wasn’t the hard part. I definitely noticed I was the only female in the barbershop, but now is the time for women. I’m for it; I’m for the movement. Most of my barbershop is female. We’re killing it right now. And for anybody that has had any struggles, I’m here. The most important thing I’ve learned in this lifetime is you’re not stuck anywhere you are.”

She carries that defiant attitude into her education, preaching sermons on self-belief and achieving your goals. Nobody is ‘just’ anything to her. Technically, her classes focus on diversifying ability – teaching barbers scissor work with Hattori Hanzo Shears, for one – to provide people with the skills that will underpin their brand.

“I love teaching. I teach to light a fire under people’s asses. I do like the technical work but in the end I want people to leave feeling inspired, whether it’s taking a piece of the way I cut and implementing it into their way of cutting or just something from my story. I’ve been poor, homeless, wealthy, poor again, wealthy and it’s all from making big jumps. A lot of failures, a lot of success, you know?

“I’ve been working with Hanzo for a few years now as an educator and they’re an awesome company. They’ve sent me to almost every state in the US and I’ve honestly met the most amazing people along the way. They let me be the hippie that I am and speak from the soul about hair and life in places I’d never think of flying. It’s easy to work with a company whose product I really believe in.”

Never one to sacrifice who she is for her career, Pope has built successful relationships with brands by choosing ones that really embody what she wants to do with her brand as a business owner. Recently, she has become an ambassador for Squire, who she says really focus on the wellbeing of your overall business.

“On a product level, they’ve trumped the previous system I used ten fold and have made it really easy for me to run my business from anywhere in the world with no worries. I was running an all-cash business before, as most barbershops do, and I was able to seamlessly upgrade my whole system in a matter of days. It’s easy. I like their vision, they understand mine, and we can grow together.”

Growth is something that Pope does not shy away from – in fact she is currently in the process of relocating and expanding her barbershop. How then, does she ensure a good work-life balance – something a lot of barbers struggle with?

“I work hard, rest harder! This year has been a major practice of true balance in my life. I’m at a point where I can step away from the shop for a bit and put my personal life and routines first and then build my work schedule around that. For you barbers and new business owners, there is a light at the end of the tunnel, I promise! I’m able to practice working smarter, not harder, so when I do go out and teach or do events or whatever I have planned, I’m able to give 1000% without burning out. I travel mostly and cut in the shop a few times a month, but mostly I just focus on living a happy and healthy life.”

Pope knows the transient nature of success, but now has a firm grip on her future and knows the value of a good work-life balance. As she said, she wants to build an empire for herself and Joannie, and I certainly wouldn’t bet against her.