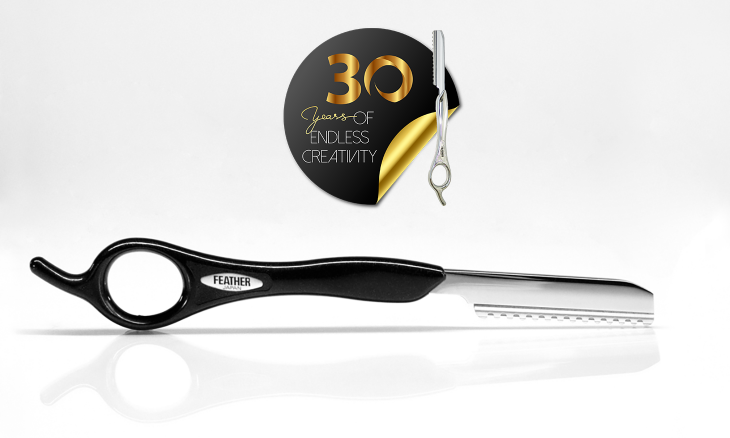 In 1992, Dean Wada, founder and CEO of JATAI, the exclusive distributor of the Feather brand in the US and Canada, approached the Feather team in Japan with an idea for a new haircutting razor that used guarded, replaceable blades. That new tool, now known industry-wide as the Feather Styling Razor, opened a door to a whole new creative space for stylists, allowing them to razor cut without fear of cutting themselves or their clients. This summer, JATAI is celebrating the 30th anniversary of the Feather Styling Razor with a new influencer driven social media campaign.

Safety was the most important factor in the design of the razor. Featuring a non-folding razor handle for ease of use and to prevent accidental cuts from an exposed blade, the Feather Styling Razor can be held like a paintbrush, becoming an extension to the hand and making it easier for stylists to use the razor more creatively. Unlike folding haircutting razors, no special training is needed with the Feather Styling Razor which also includes a blade tray and disposal case that allows stylists to insert and dispose blades without having to touch them.

When reflecting on the anniversary, Wada said, “Over the last 30 years, the success of our company and the Feather brand has been deeply rooted not only in our business strategy, but in the creativity of the hair professionals. It was our intention to design a safe haircutting tool for them that allowed them to freely create and showcase their artistry and skill. We are thrilled that all these years later, the Feather Styling Razor is still the number one haircutting razor on the market.”

Since its debut in 1992, the Feather Styling Razor has forever changed the way hair professionals cut hair, allowing for unique and fun styles that can only be achieved by a razor. JATAI will be honoring that endless creativity with its summer campaign which will feature a host of stylist-led content including a collection of anniversary-themed videos in the JATAI Academy, JATAI’s free online education platform. The new Education CONNECT video tutorials will showcase modern day takes on iconic hairstyles from the past three decades including 1990s grunge-inspired French bob inspired by Winona Ryder and Drew Barrymore’s iconic ‘90s looks; a 2000s-inspired pixie made famous by Halle Berry; an ode to the sexy, long layered cut of the 2010s; and one of today’s hottest styles, the shullet. Filmed with Los Angeles-based stylists Janine Jarman (@janinejarman), Mikey Teeze (@mikey_teeze), Rae Steele (@raeikole) and Charli Boell (@shrunknheads), respectively, each video will highlight the versatility of the Feather Styling Razor, showing a complete haircut done using only the razor.

In addition to the education-focused content, JATAI will also collaborate with influential razor-cut specialists for a social media campaign across Instagram and TikTok. These stylists, who know and love the Feather Styling Razor, will be sharing tutorials, finished looks and their own personal tips and tricks using the razor. JATAI will also be hosting giveaways and special offers on the razor handle and Styling Razor Blades exclusively on JATAI.net.