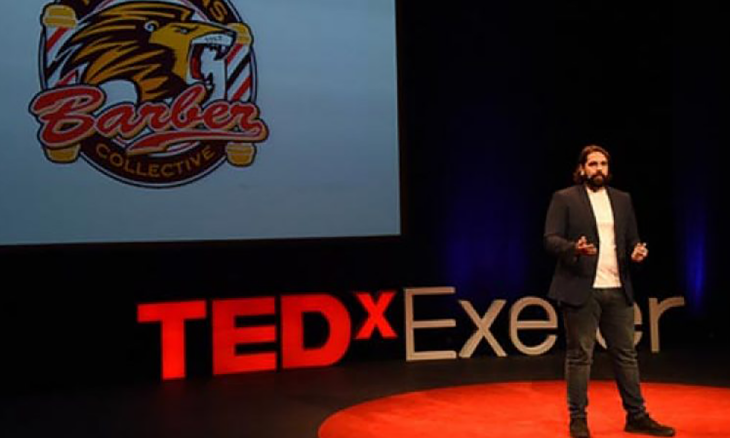 Newton Abbot Station hosted a pop-up barbershop on January 10, where men got a free haircut and a chance to discuss their mental health at the same time. It is one of the first pop-ups to be hosted by The Lions Barber Collective following a £25,000 grant from Great Western Railway, reports DevonLive.

Three barbers who have been trained to recognise signs of poor mental health in their clients were on hand to cut hair, trim beards and provide a listening ear.

They were joined at the station by South Devon Samaritans volunteers, who were handing out cups of tea to passengers ahead of the charity’s annual Brew Monday campaign on January 17.

Recognising that barbers and hair professionals are often a friendly ear to their customers, Tom collaborated with experts to develop a training programme for hair and beauty professionals to support their clients and communities.

The clinically-backed BarberTalk programme gives barbers the skills to direct questions to trigger conversation and to signpost clients to the support they need.

Tom said: “We’re fully-trained to make people look and feel amazing and most importantly listen with empathy and without judgment to those in the chair. We’re using this as a vehicle to connect with the community and start conversations around mental health.”

GWR Community Manager Emma Morris added: “The Lions Barber Collective carries out vital work in helping to open up conversations around mental health and we believe these pop-up barbershops could be of real benefit to some of our customers and colleagues.

“We’re really excited about this pop-up at Newton Abbot and look forward to working with the Collective to bring more of these events to our stations.”

While the third Monday in January is sometimes referred to as ‘the most difficult day of the year’, the charity is highlighting that there’s no such thing as ‘Blue Monday’ as people can feel a range of emotions any day of the year.

South Devon Samaritans branch director Dean Sanders said: “We’re really looking forward to being at Newton Abbot station to talk to passengers and are so thankful to the rail industry for their support.

“As we enter another winter in these difficult times, we are encouraging people to look out for their family, friends and work colleagues and be that listening ear that they might just need.

“It doesn’t matter if it’s Monday morning or Thursday night, or if you’re drinking lemonade, black coffee or apple juice. If you’re sharing a cup of something and listening, you’re making a difference to someone’s day.”