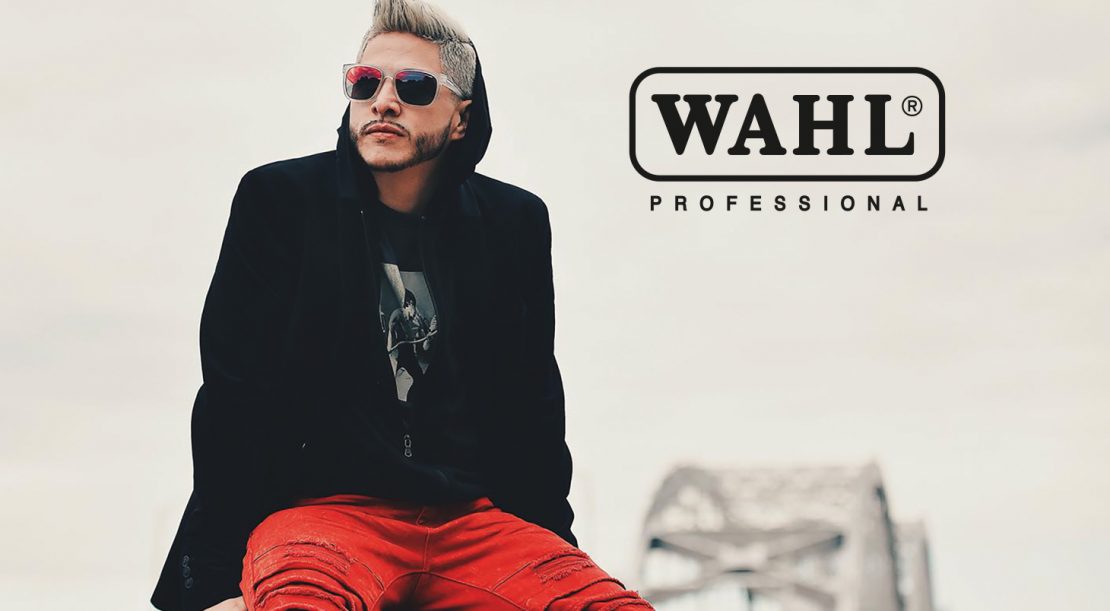 Welcome to the first EVO Rewind!

We will be regularly uploading to the website some of our favourite BarberEVO interviews of the past several years… and who better to start us off?

He opened his first barbershop in his teens, has won over 25 barber battle trophies, came first on Cedric’s Barber Battle TV show and now leads the way with his academy in Moline, Illinois.

You can read the full interview below and view the spread as it appeared in the printed magazine too!

CREATIVITY, RESOURCEFULNESS AND AN EYE FOR DETAIL ARE ONLY A FEW OF THE QUALITIES WHICH MADE MIGUEL ROSAS STAND OUT FROM THE CROWD AND BE NOTICED, NOW IN HIS THIRD YEAR AS A MEMBER OF THE WAHL EDUCATION AND ARTISTIC TEAM.

At just 19 years old, launching his own barbershop proved to be a steep learning curve for Miguel Rosas. However, the challenges and pitfalls of starting up a business so early on have only fuelled Miguel’s desire to learn, improve, and pursue his passion for the craft. Fast forward several years later, he is now part of the Wahl Education and Artistic Team, CEO of The New Style Barbershop and, as of February, a proud proprietor of his own barbering school, the New Style Hair Academy in Moline, Illinois. Miguel is without doubt a barber who perseveres through adversity and keeps on going.

Getting into business with an older and perhaps more streetwise business partner proved to be costly and set Miguel back considerably at such a young age. Things didn’t work out smoothly for his first barbershop attempt, but this didn’t deter him. Miguel quickly realized that there were gaps in his knowledge that needed to be filled in order for him to run a business successfully, in addition to having those crucial barbering skills. He enrolled in classes to cover essential business skills such as accounting, taxes and balancing the books. Miguel explains: “My next step was to open up a barbershop somewhere else in the area… this time round I wanted to make sure if I did it, I was just a lot more professional about it, so that was the reason why I took the classes.”

Miguel has been an avid participant in Barber Battles, having won over 25 trophies to date.  Outgrowing the barbering challenges presented in his local area, he wanted to compete further afield in places such as Chicago, Texas and New York. He recalls, “I saw the Barber Battle and I thought, you know what? I want to do that. I want to go see how good I am compared to these guys in the bigger city.”

Having placed third in his first competition, Miguel was both scared and hooked by the experience in equal measures, and he was ready to compete again. Backed by a supportive group which included his hair models, they would drive on the road for up to 16 hours to attend competitions. These barber battles judged the ability of barbers on a myriad of different categories such as fastest fade, best portrait, best design, and best old-school style. It was at these earlier competitions that Miguel first met prominent figures from Wahl Professional, such as the late Isadore Adams.

Miguel notes the importance of strategy to his rising success in competitions. “I would choose people with really good hair, thick hair, hair with bleach to see the fade really nice – it’d stick out really well. It’s all about choosing the right canvas. You need to have a really good canvas, it’s really important when you’re doing a Barber Battle.”

Opportunities for television-wide publicity really took off for Miguel after his barbering skills were noticed by Lee Resnick from Barbershop Connect following a first-place competition win. Lee’s contacts in both the barbering and the television industry would boost Miguel into the limelight, having secured him a competing place on Cedric’s Barber Battle.

Miguel reflects: “Man, when I got that phone call I was super excited, getting a phone call from Beverly Hills from the producer, and he’s telling me all the details… I’m thinking, ‘I’ve made it’. It was definitely one of the most exciting journeys of my barbering career, knowing I was gonna be on T.V., the world was gonna see me, and I was gonna be able to put my barbering skills to the ultimate test.”

Following on from his television success, Miguel aspired to share the many skills and barbering techniques he had learnt along the way, and it seemed naturally fitting that he wanted to work for a five-star brand such as Wahl Professional as a hair design educator. Miguel really went the extra mile to get his name noticed within the company. He took the initiative by reaching out via social media to express his interest in the role, but it was one striking haircut that really made him stand out from the crowd – a portrait of then Chicago Cubs starting pitcher Jake Arrieta.

“I went to the game in Chicago, I was in the very last seat, all the way up in the very top. I had my friend’s son with me that I did the design on. I said, ‘let’s try and get down on the field somehow.’ So we did, we just started pushing through everybody. Finally, they let him go onto the field and he ran up to Jake Arrieta. Some people think that was set up, like we were invited onto the field – it wasn’t like that.” Demonstrating his skill set was something that Miguel had always gone above and beyond to do, and it had finally paid off.

The haircut went viral across social media, and was re-shared by both Major League Baseball and The Cubs on Instagram, garnering thousands of likes and comments, in addition to interviews by Fox 32, ABC, and Univision. As a self-taught artist who favors the Wahl Professional Detailer as his trimmer of choice, this just goes to show how far skill, creativity, perseverance and the right tools can get someone.

Miguel recalls that he was contacted by a representative from Wahl Professional, who told him that he posted a lot of good work and had a positive attitude – they were ready to talk to him about joining the Wahl Professional team. “And that’s kinda how that happened. It kinda just went from there,” he says.

Included in his portfolio of hair art are figures ranging from LeBron James, Aaron Rodgers, Anthony Rizzo and Floyd Mayweather to Bernie Sanders; even Colonel Sanders from KFC, which impressed one district manager enough to gift Miguel a prestigious card to receive free KFC food for life.

Miguel’s hair portraits are influenced by the work of barbers such as Radames Perez and Rob the Original, who were big inspirations in terms of portrait detailing. “Once I’d seen that this was possible, I just said, ‘well, shoot’, you know? If they can do it, I can do it. So I just started practising and I started off doing basic stencilized pictures of people’s faces; once I got good at doing the stencilized version of their face I would then start blending and fading, and creating detail with my clippers so that it would make it more lifelike, rather than a stencil or a cartoon look.”

This affinity for hair design has held Miguel in good stead throughout his career to date, however, he emphasizes that he’s not a one-trick pony. Whilst Miguel is confident with every aspect of men’s hair, hair detailing is his creative outlet. He states: “Some of the stuff you see, I didn’t do it because I was getting paid. I did it for my own satisfaction and being able to use a different type of medium when it comes to art… it’s not your bread and butter as a barber.”

Miguel has leapt towards every barbering opportunity and when there wasn’t one, he created it for himself through education and social networking savvy. His drive and attention to detail make him an excellent member of the Wahl Education and Artistic Team, for which he is now busy educating the next generation of skilled barbers in the use of premium Wahl Professional tools.