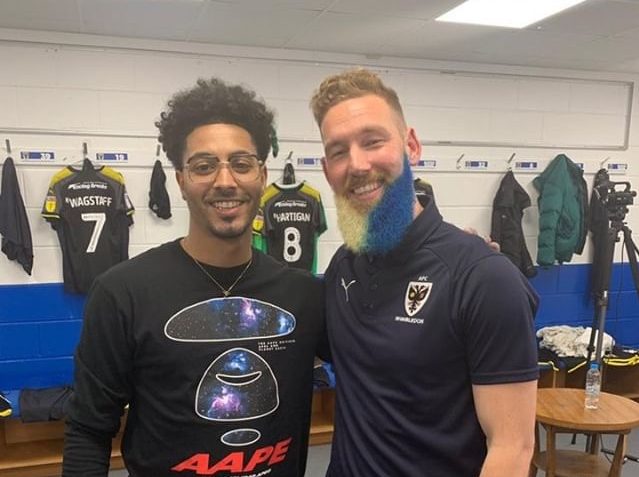 ‘Ballers Barber and OSMO Ambassador Justin Carr took his barbering skills to a new level when AFC Wimbledon player, Scott Wagstaff, asked to have his impressive beard dyed in his club colours.

Scott stuck to a promise he made before the last round of the FA Cup, to have his trademark beard dyed, if AFC Wimbledon beat West Ham United – and they did!

OSMO’s Justin Carr, who is called upon by many famous sports players and footballers, did the honours in the home changing room for a BBC Football Focus TV feature. Following two hours of Justin’s magic, Scott’s beard was blue and yellow!

“This was just wicked.  Scott was so up for it!  I had to bleach his beard first to lighten it, then I applied OSMO Color Psycho Semi-Permanent Hair Colour in Wild Blue to reflect to colour of AFC Wimbledon. He was really cool with the finished look and all the national papers came down to cover it – it’s been everywhere in the papers and online. He’s now got to go on and score, to do the beard some real celebrations!  Maybe I’ve just created a new trend too…the day/night beard,” said Justin.