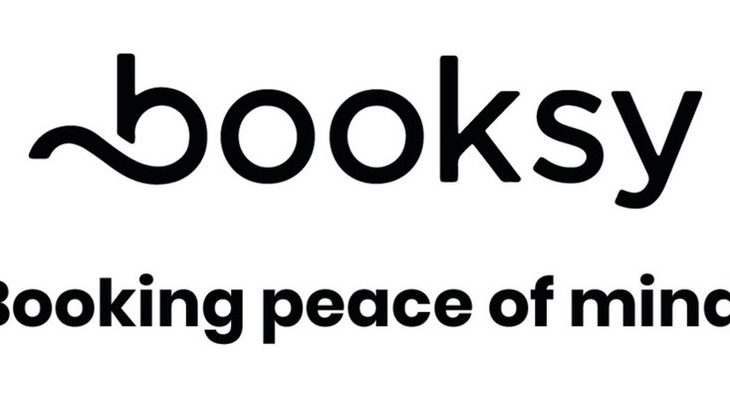 CHICAGO, IL (April 2022)— Booksy is delighted to announce Lisa Finucane as new Senior Category Manager for Barbering and Hair Verticals. As a professional hairstylist, Finucane brings 32 years of experience in the beauty industry to her new position at Booksy.

Booksy is the leading scheduling and business app for the beauty industry that is designed to make lives simpler and much more efficient. The cloud-based app easily connects beauty industry service providers with customers. Booksy not only allows for convenient 24/7 online appointment booking for clients but is also a comprehensive business management tool for beauty businesses of all sizes. Currently, Booksy is available in 6 countries and supports over 150 million annualized client appointments.

Beginning her career as a behind the chair stylist, Lisa Finucane went on to various color education and sales roles before beginning her new and exciting opportunity with Booksy in February 2022.In her new role,she is responsible for marketing and expansion within the barbering and hair sectors! She is also responsible for campaigns, trade shows, and ambassador acquisition to help ensure Booksy is the premier choice for beauty professionals nationwide.

Lisa’s previous experience as National Director of Education at Wahl Professional has allowed her to work closely with successful hairdressers, barbers, and salons across the US. Her personal philosophy centers around her belief that the beauty industry is “the best in the world.”  Finucane is proud graduate of Pivot Point International. She is in the home stretch of a lifelong goal of completing a PhD as well. Her research highlighted how barbers present him or herself as an agent of social justice change.

“I am excited to bring my extensive experience and knowledge of the beauty industry to the Booksy team and to be part of the future growth of this amazing technology. I want to thank Dee Hadley, Head of Marketing at Booksy, and the entire management team who have been very supportive as I dive into this new role. I am honored to be working with such talented and creative individuals,” commented Finucane. 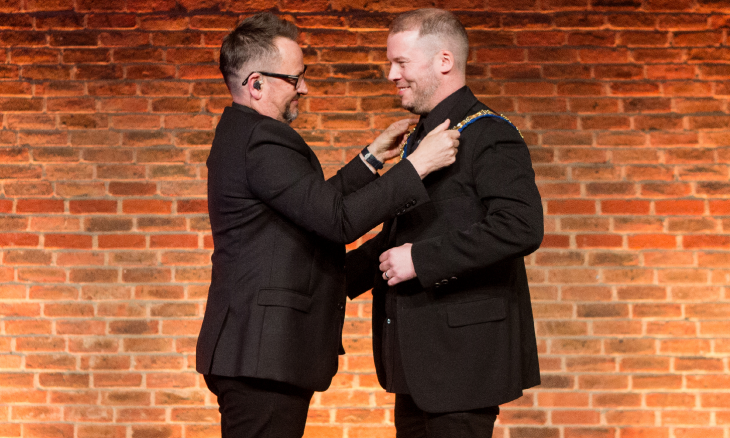 Robert Eaton has been welcomed as the new President for the Fellowship for British Hairdressing at a star-studded event in London.

Ken Picton, who has led the organisation for the past three years, handed over the reigns to British Hairdresser of the Year Robert Eaton in front of industry peers at the President’s Night.

Held at the Brewery in East London, Ken relived some of his favourite times as President – and the challenges brought with the pandemic. But before he could leave there were a few surprises – he brought his Drinks with the President live to the stage with some of his favourite guests including Sally Brooks, Mark Woolley and Michael Douglas, while a video highlighted just some of the things he has implemented during his reign.

Ken recalled: “When I took over as President in 2019 we had no idea what was ahead of us. But we have worked hard to modernise the Fellowship for a new era of hairdressing. It’s been a privilege to lead the Fellowship through these turbulent times and I look forward to being part of the future.”

Receiving his regalia, Robert added: “Today is very special for me, when I started my journey in the family business it was about networking and making friends. My whole career has been shaped by the Fellowship; I was part of the 2003 F.A.M.E. Team which was incredibly special and instilled in me the importance of nurturing the next generation. Now, it’s my time to give back and help young people in this industry. I want to work with as many people as possible to evolve the industry and continue the heritage the Fellowship has always had.” 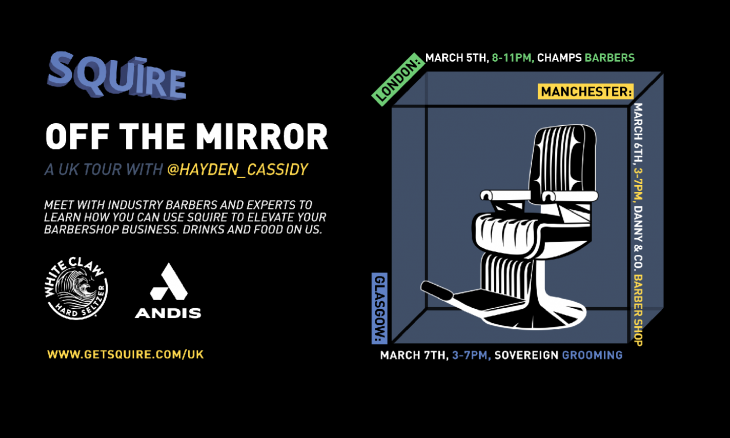 UK Squire is Back!

UK, SQUIRE is back! And, with their first-ever exclusive UK tour hosted by @hayden_cassidy! Get in the game with the UK’s most elite barbers. The drinks, food, music & raffles are on SQUIRE– as well as free onsite SQUIRE demos that will show you how to elevate your barbershop. The first five accounts per tour stop to sign up to become SQUIRE users will receive a free 1:1 virtual workshop with Hayden for a Higher Learning session powered by SQUIRE. See you there!

And pick up your FREE copy of BarberEVO magazine! 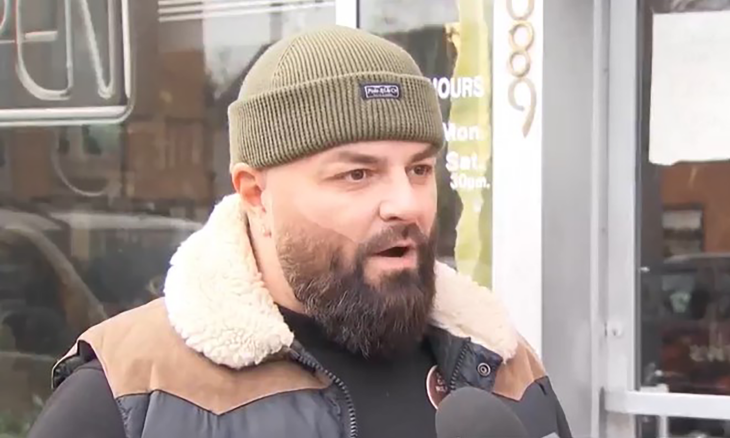 Donations pour in for Hartford barber after a break in

Connecticut barber Peter Tsakiris of Peter’s Unisex Hairstyling in Hartford, has been cutting the hair of local residents for half a century and has reported that a thief stole $10,000 of clipper and razor equipment from his barbershop after a break-in.

Peter said: “I always felt that I didn’t need an alarm or insurance, but it happens.” News of the incident spread thanks to Johnny Cruz, a local client who posted about it on TikTok.

The buzz on social media caught the attention of Jay Majors who runs the Connecticut Barber Expo, who said: “Every barber started messaging me. Barbering is nostalgic, it is about history. These are our predecessors, so it hurt my feelings for someone to target someone like that.” Donations started coming into Jay from as far away as Cleveland Ohio, and the result was that Jay collected up thousands of dollars of new equipment and delivered it to Peter to choose from.

Tsakiris was able to pick out clippers, disinfectant, aftershave and everything else he needed from the money that was donated.

Tsakiris, who is a third-generation barber said that some of what was stolen was sentimental. “My father was a barber, and I had some clippers and razors that he has passed down.” To him they were priceless.

Two days shy of his 80th birthday and the barber has received the best birthday wish of all. “I couldn’t be any happier, I had no tools when I walked in this morning and now look around, I got everything I need and more.” 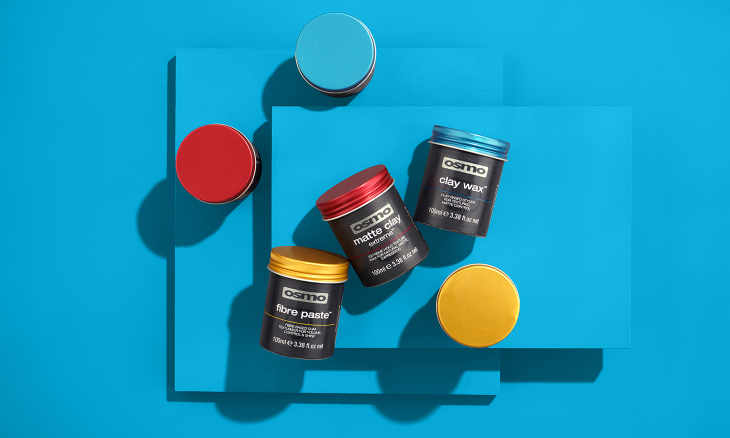 With so many great grooming products on the market –OSMO Ambassador and owner of Myles & Co, Myles Lewis, is here to share his top tips on using and recommending the best products for your clients…

“It’s hard to pick, but my top three products at the moment are OSMO Clay Wax, Fibre Paste, and Matte Clay Extreme. These products are the ultimate trio for high-performance styling results. They offer anyone using the products on – trend and traditional finishes from freestyle to fierce.”

The best selling OSMO Matte Clay Extreme™ (RRP: £8.99) formula can deliver an authentic dry textured controlled finish. I use it to create a powerful hold with that natural matte finish. This pot is ideal for all hair types, rub the product through your palms and distribute evenly to experience the ultimate dry textured look. Clients love this one as well. It’s got a great melon fresh fragrance and always creates outstanding results.

I always use the OSMO Fibre Paste™ (RRP: £8.99) when I want volume control with a polished shine finish. The gum texturiser is suitable for all hair types and can create a messed up or smooth finish. If you run a small amount of OSMO Fibre Paste between the palms of your hands, then pull your hands apart this stretches the fibres (looks impressive to your clients too!) and you can then run your fingers through wet or dry hair, then style for a strong finish.

I use the best-selling OSMO Clay Wax™ (RRP: £8.99) to style medium to short hair. This clay-based styler helps me create an ultra-masculine matte finish. I massage a small amount thoroughly through wet or dry hair. It instantly provides textured control and thickness vibe that the lads love.

All images credit: Hair by @myleslewisbarber, Myles & Co for OSMO

The OSMO Grooming range is available from wholesalers nationwide, visit www.osmo.uk.com for your nearest stockist. 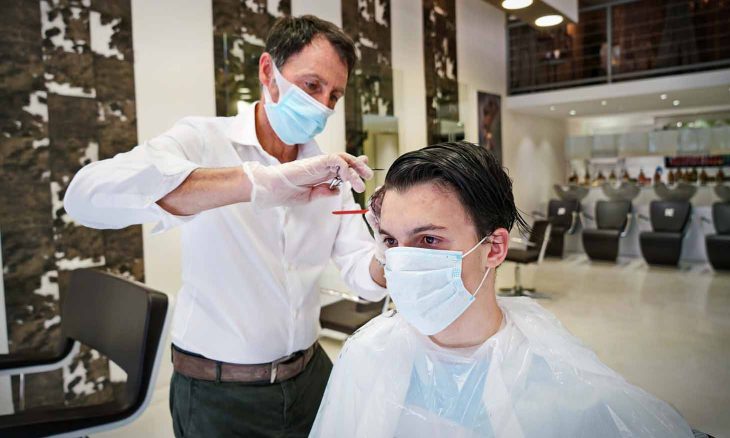 Due to the recent announcement from the Government on the compulsory wearing of face coverings, VTCT has released a statement.

“During the course of the pandemic, VTCT has remained steadfast in our advice — one of the best practices for personal protection is to use PPE appropriately.

“This includes the use of face masks, especially due to the nature of the services our practitioners provide, i.e. the close proximity of clients.

“Whilst we are waiting for the main guidance to be updated, the government has published an amendment stating: “Face coverings are legally required indoors in shops, personal care services and public transport in England, from 4am Tuesday 30 November.”

“As outlined in our Infection Prevention Qualifications, we recommend using disposable/single-use face coverings that are changed for each client. It’s important to ensure these are close-fitting, cover both nose and mouth, and avoid touching the face coverings once in place.

“Additionally, do not allow the mask to dangle around the neck and it should be disposed of once it becomes damp. For further information, visit: https://www.vtct.org.uk/coronavirus-latest/. 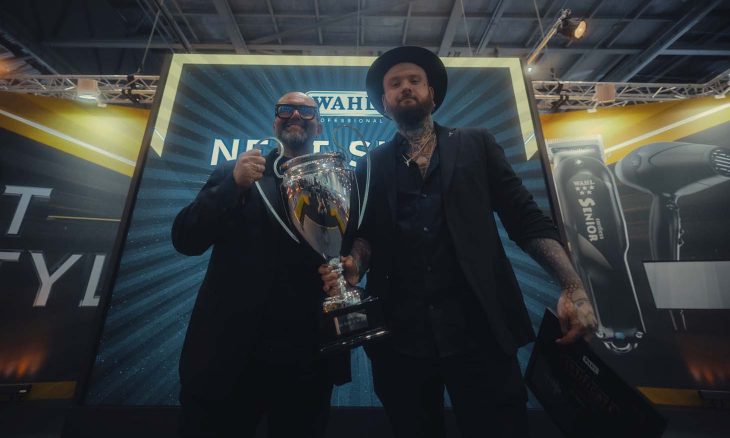 Rhys Whitehouse announced as Wahl British Barber of the Year

In what was a record breaking year for entries, the Wahl British Barber of the Year 2021 was announced this past Sunday at Salon International in London.

In front of a big crowd on the Wahl booth, Simon Shaw announced Rhys Whitehouse as the winner, following live demonstrations by the five finalists.

Rhys, a barber at Hinces in Shrewsbury follows in the footsteps of 2020 winner Kilian Maddison.

All at BarberEVO congratulate Rhys and look forward to watching him work with Wahl throughout 2022 and beyond. 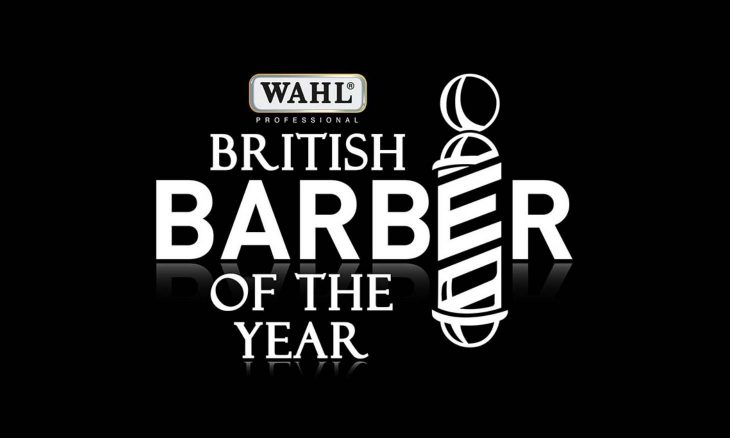 Finalists Announced for 2021 Wahl British Barber / Barbershop of the Year

After an incredibly difficult judging process, with record breaking amounts of entries, the finalists for the Wahl British and Barbershop Barber of the Year have been announced!

You can view the finalist line-up below:

Finalists will be announced on Sunday 17th October! Good luck everyone! 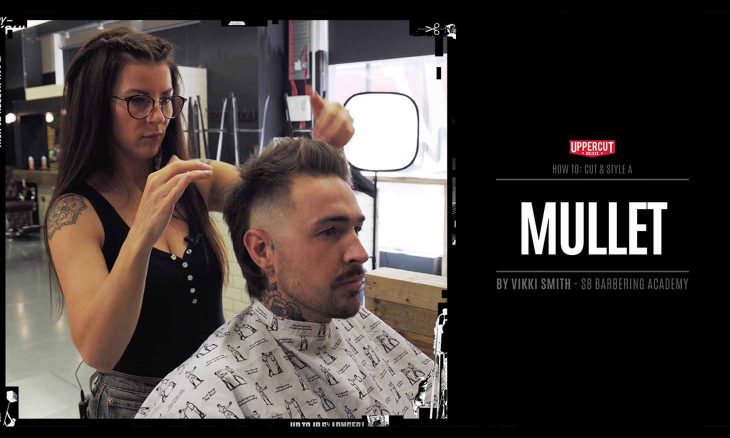 Uppercut Deluxe Launch ‘How To Cut and Style’ Video demonstrations

Uppercut Deluxe has recently launched a new series of monthly videos that will show the intricacies of a particular haircut in an informative, enjoyable and relaxing way, at around 20 minutes each they are full of great info and are available to vie in 4K Ultra HD.

Kicking off the series is BarberEVO columnist Vikki Harrison Smith, Uppercut Deluxe Education Ambassador and she takes us through how she cuts a mullet, which is definitely back on-trend.

Upcoming videos will feature Chris Skeggs of Queens Dock barbershop and Charlie Venn of Lucky Seven’s Barbershop among many others.

To tune into Vikki’s mullet demo, click here or the link below. 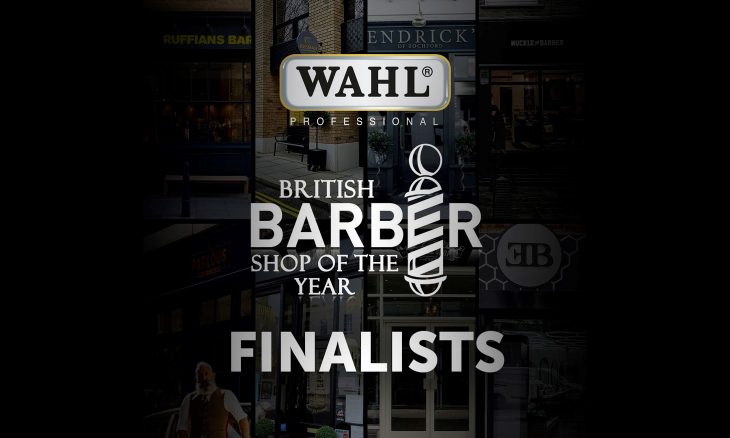 Eight of the hottest shops in the UK and Ireland have been announced as finalists in the Wahl Barbershop of the Year competition. The finalists are:

Congratulations to:⁠⁠
⁠⁠
Andys Barbershop (the defending champion) @andysbarbers_bicester⁠⁠
Barbertown Worcester @barbertownworcs⁠⁠
EMI Bertea Barbershop Academy @__e.b.b.a__⁠⁠
Huckle the Barber @hucklethebarber⁠⁠
Kendrick’s of Rochford @kendricks_of_rochford⁠⁠
Kesman Male Grooming @kesmanmalegrooming⁠⁠
Parlous Barbers @parlousbarbers⁠⁠
Ruffians Barbers @ruffians⁠⁠
⁠⁠
Simon Shaw said: “Once again, the standard of entries was off the charts. There were so many great shops to choose from. So, a huge thank you to all that entered, you guys are all killing it with your team, the services you offer, the interiors, everything was 👌!”⁠⁠
⁠⁠
Make sure you head to the Wahl stage at Salon international on Sunday 17th October as the winner will be announced at 3pm SHARP!⁠⁠

Best of luck to all the finalists!

Meet the Andis team, the best in the industry, at

@witchfades is taking creative cuts to a whole oth

The reSURGE Shaver 👉 your go-to tool to finish

The Hair Picasso🎨   The color, the sharpness o

CONGRATULATIONS TO A LEGEND!👏🏼 Huge congra

Upgrade your barbershop with FREE* Salon Design an