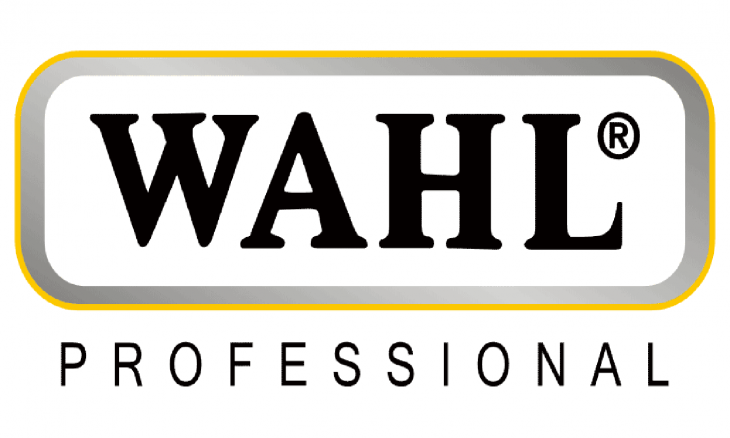 Wahl (UK) have launched Team Talk: Live with WAHL, to support the barbering and hairdressing industry, focusing on the teams and individuals behind the salons and shops.

Wahl’s initiative offers salons and shops a free 1 hour, dedicated and personalised session to engage with each other and an industry expert from the WAHL UK Education & Artistic Team. It provides an opportunity to ask questions about the industry, hair cutting techniques, learn about products or seek advice on building your business and your team. Most importantly, it’s a chance to motivate your team and re-connect with each other.

“The idea behind Team Talk is for me and the Wahl team to meet all the wonderful barbers and hairdressers in this difficult time of Lockdown. The goal is to share some knowledge, raise a smile and feel united together!” Says Simon Shaw, WAHL Global Artistic Director.

Wahl’s Team Talk hopes to help you re-energise, re-focus and re-connect with your team.  Each session will be tailored to your team and completely personal. The sessions also offer an opportunity to motivate your team, re-energise and feel good about the future. As well, Team Talks will provide free advice and education from industry experts on haircuts and techniques, tool maintenance, industry insights and business improvements.

Applications: To find out more and apply for a Team Talk Live with WAHL, head to WAHL.CO.UK. Media enquiries: Nicola.Barnes@wahl.co.uk | 01227 744327 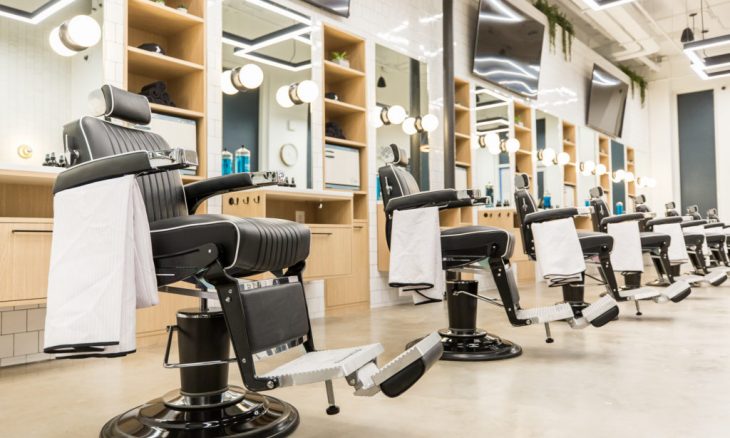 The Bearded Goat, from Washington entrepreneurs Eric Renfro, Jon Dodson, and Scott Parker, is opening its third location, at the Village at Shirlington. It will be located 4150 Campbell Ave.

“The Village at Shirlington is the ideal location for Bearded Goat Barber to open its third location,” writes co-founder Scott Parker in a press release. “Having opened our first shop in Ballston in 2019, and our second location in Navy Yard in Washington, DC this year, we are focused on neighborhoods that are future-focused, while retaining a certain charm.”

The barber shop will, of course, adhere to strict CDC guidelines, according to the release.

This includes santaizing workspaces, tools, chairs, capes, and waiting areas in between all visits. Masks are also required to be worn at all times by both patrons and employees, through the entire grooming experience.

The first Bearded Goat Barber location opened in Ballston about two years ago. It temporarily shut down last March due to the pandemic and reopened in May with new safety and health guidelines in place. The second location recently opened in Navy Yard in Southeast D.C.

The upscale barber shop is a partnership between two barbers, Renfro and Dodson, who were previously working at Clarendon’s Hendrick Barbershop, and serial local entrepreneur Parker. 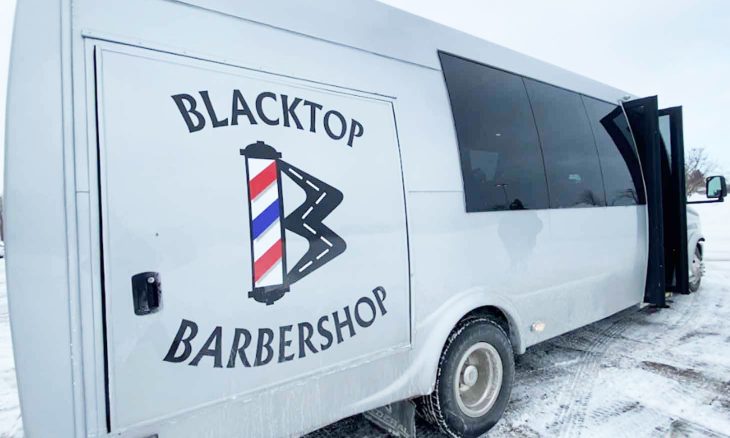 A Wisconsin native came up with a unique idea for a business and decided to start it up in his hometown.

Mitchell Thomas is a barber, which means he’s in the business of making people look and feel good. For him it’s a passion that soon turned into a golden opportunity.

“When barbers were not essential for seven weeks you have a lot of time to think and I feel like in hard times you have to innovate,” Blacktop Barbershop owner Mitchell Thomas said.

Innovate is what he did. The inside of his barber shop looks a bit different, that’s because it’s inside a bus. Mitchell decided to convert a bus into a mobile barber shop that commutes around south eastern Wisconsin. He thought it was a one-of-a-kind idea and he could come to the customer, which is extremely valuable during a pandemic.

He may only be a month in, but is excited to see where his business goes.

“Every step along the way has been challenging but that’s kind of the thing with starting something new,” Thomas said. “You have to blaze a trail. It looks cool but it’s a lot of work getting it started and I’m definitely happy I decided to do it.”

For one of his customers who has been there from the start of his career, his grandpa, he says watching him start his own business is truly a proud moment.

“I think it’s very rewarding for me because I’ve watched him from the very beginning, build his career,” his grandfather, Thomas Marco, said.

Now he gets to watch him in a new chapter, while still cashing in on those free cuts. 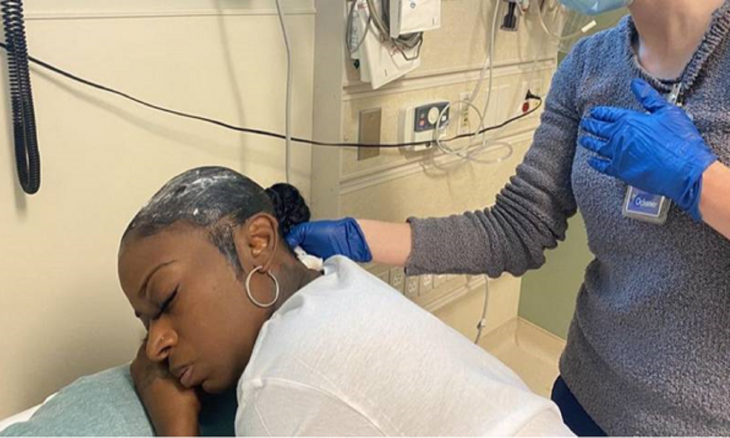 Over $21,000 Raised for Woman Who Used Gorilla Glue as a Hair Adhesive

After opening up to social media about her hair disaster, Teresa Brown’s story went viral, leading to over $21,000 raised to help.

After running out of her usual styling spray, Brown used the strong spray adhesive, Gorilla Glue, on her hair. In her video, Brown showed the world how her hair stuck permanently to her scalp, “I have washed it fifteen times and it don’t move!”

After a month of trying to extricate the glue using coconut oil and tea tree oil, Brown still was having no luck washing the product out.

After putting up the video, Brown set up a GoFundMe page with the target of $1,500, to help pay for the inevitable hospital bills. However, due to her unlikely internet fame, viewers sympathy of Brown led to surpass her target by $20,000.

Additionally, LA doctor Michael Obeng carried out treatment to fix her ordeal, which would have cost $12,500, for free.

To sort out the damage done by the glue, Dr. Obeng placed Brown under light-anaesthesia for the four-hour procedure. After figuring out the compound in the glue, Obeng used a combination of medical grade adhesive remover, aloe vera, olive oil and acetone to break down the compound. He also experimented with real human hair on a model, before working on Brown’s hair.

Gorilla Glue have issued a statement saying: “We strongly discourage misuse of our products. Please consult all packaging labels for proper use.”

Let’s hope Brown’s ordeal is a lesson for future, for anyone who has run out of their usual styling products. 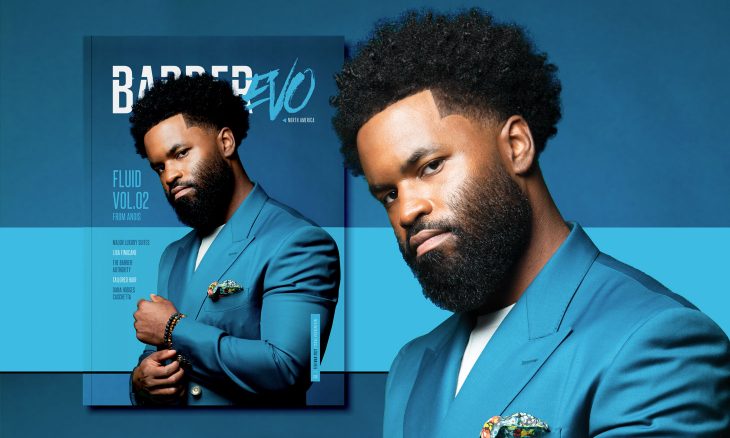 WELCOME TO THE FIRST BARBEREVO NORTH AMERICA EDITION OF 2021. WE ARE DELIGHTED TO SEE THE BACK OF 2020 AND LOOK FORWARD TO AN EXCITING YEAR AHEAD.

We are committed to continuing to deliver a combination of creative content, inspirational features with the biggest names in the business, and the very best of real-life business advice to ensure we keep everyone rolling in the right direction.

With that in mind, events and tradeshows are top of our list in this issue as we talk to those in the know. The organisers of the events, that we miss so much, talk about the chances of them going ahead, the challenges they face with staging them in a pandemic and the hopes for the ones that are scheduled for this year.

This issue’s barbershop focus has some cool places featured. Barbers are so proud of their shops, whether they are traditional, cutting edge, minimalist, or are designing with Instagram in mind, the design is so personal, and how you choose to furnish your shop, and the décor you choose, can make or break the visual. We’ve found some knock-out barbershops that have opened their doors to BarberEVO, talked us through their décor decisions, what works for them and what they love about their shops.

A hugely important part of the hair industry right now is how it can be more sustainable. We have spoken to hair professionals who have taken their personal commitment to being eco-friendly and carried it through to their shops and their business practices. Whether you want to commit fully or just make a small change, have a read of our eco feature and see what changes you can make to be a little gentler on the planet.

Last, but certainly not least, The Barber Authority’s Steve Vilot lets us into some tour secrets as he and his band of elite barbers provide grooming services for international rock starts and the world’s top athletes. It’s a great read, and his commitment to elevating the image of barbering is commendable.

You can order your printed copy of the new edition right here. 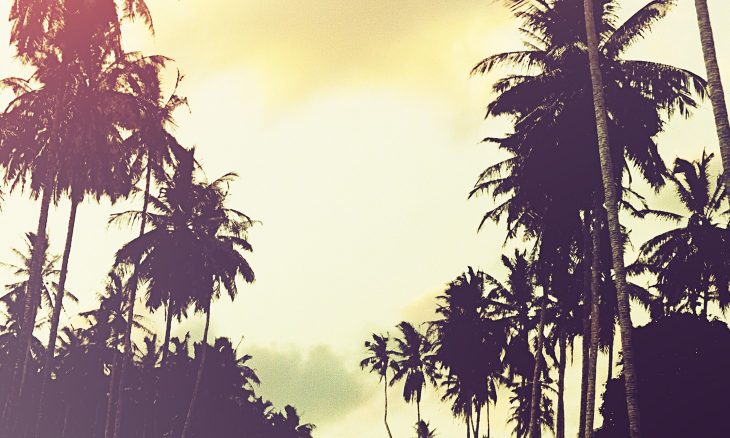 As of the 25th of January, Health Officials have lifted the Regional Stay at Home Order in California and put the state into the ‘Purple Tier.’

This allows ‘personal care services’ such as barbershops, hair salons, and nail bars to operate indoors. However, Health Officials ask that businesses operate at 25% capacity, and continue to social distance and wear face masks where applicable.

Until the 25,th California had been the only state in which barbershops and hair and beauty salons were under strict regulations to stay closed.

Thankfully, the ICU percentages and case rates have remained low enough over the last month for restrictions to be lifted enough for beauty industry professionals to get back at it. 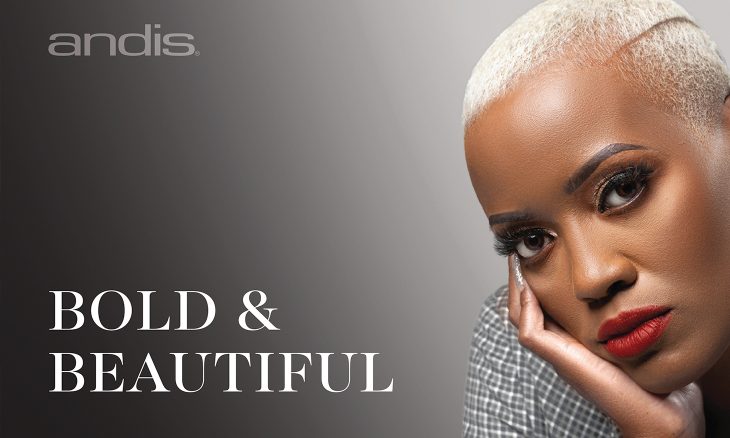 Angie Perino, Managing Director for FLUID and Global Education Manager for Andis Company. “Kenny and Eric are world renowned for their talent and skills as educators within the beauty and barber industry. They did an incredible job of creating looks that allow learners to expand their skillset, preparing them to service any type of hair pattern they encounter. Their creative techniques will inspire the industry to continue reaching for its fullest potential.”

The publication includes step-by-step guides on how to achieve each look, including the tool for each step, suggested techniques, and tips for perfecting the cut. For barbers and stylists who may be less experienced with textured hair, the book also contains a hair pattern terminology guide, outlining the types of hair by size and pattern, along with other terms commonly used when cutting and styling hair.

Fluid Volume Two is available for purchase here for $14.95. 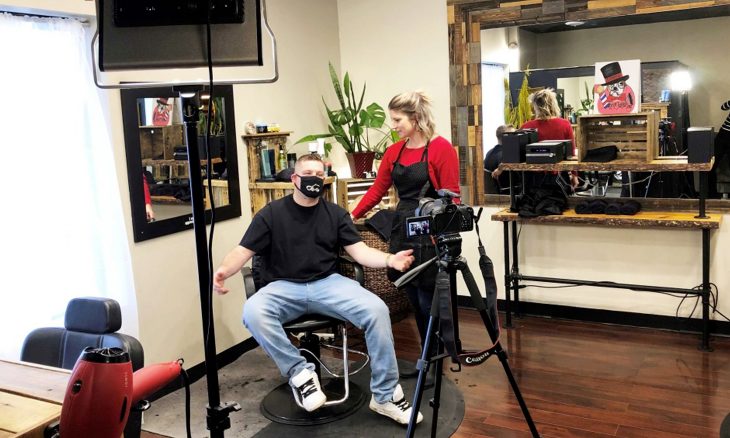 There’s no getting away from the hardship that having to close your barbershop can bring. Barbershops in Ontario are currently unable to open due to the ongoing Covid-19 pandemic, as part of a province-wide declaration of emergency and a stay at home order.

However, the folk at Chrome Artistic Barbering are able to remain open, despite this. They are offering their clients auditions for $37 each to participate in their podcast and documentary, by being filmed having a discussion about their lives whilst getting a haircut.

While hair salons and barbershops are not permitted to open right now in Toronto, film production is permitted.

Despite the controversial nature of this, owner Alicia Hirter told local press that it wasn’t a case of exploiting any loopholes. Camera’s, lights and microphones were already set up in the shop, and this had been planned for some time ago. 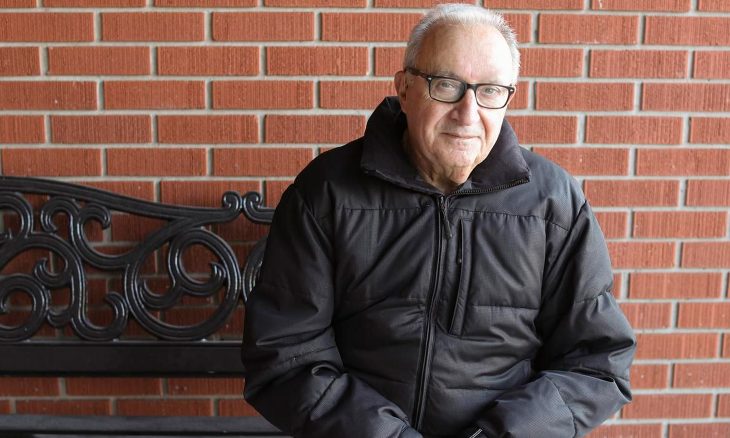 Legendary Ontario barber Frank Filice has hung up his clippers one last time, leaving behind a notable career, with clients ranging from Premiers, Politicians, Bureaucrats and Journalists.

“Frank the Barber” cut hair in his basement shop at the Ontario Legislature, which explains those intriguing clients, for over 45 years.

Frank originally arrived in Toronto in 1960, aged 16, from his native Calabria in Italy.

We wish Frank, who was clearly a local legend, the happiest of retirements! 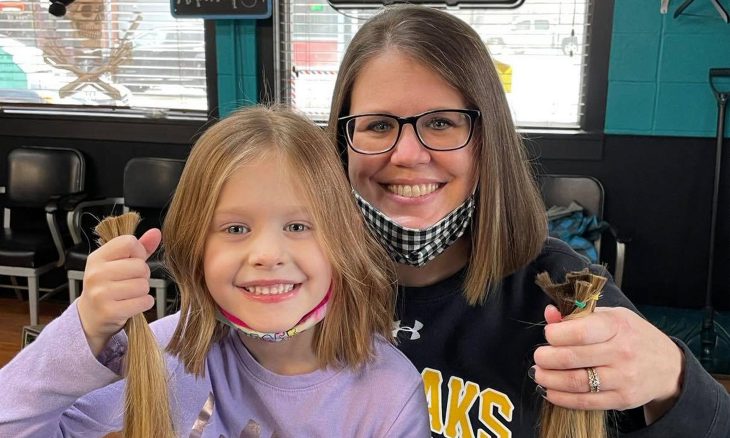 A 6 year old kindergartener from Galesburg, IL, recently donated much of her hair to a charity that can use it to help produce wigs for those without hair due to medical reasons.

The inspirational Delaney Pickrel said, “I did it because I thought it would be cute and I wanted to help kids who didn’t have hair.”

Her sister in law, Raylyn, a stylist for 15 years, who works at Glory Days Corner Barber Shop did the honours. The hair will be donated to Children With Hair Loss – a cause that she loves being able to support.

We salute young Delaney for her awesome gesture, and urge you to also support www.childrenwithhairloss.us if you can!

Looking for a bond repair treatment that is able t

❓Do your clients need after care❓ Of COURSE TH

So what is C21 technology? Watch this to find out!

Enter the #GetDiscoveredBackstage contest and WIN

Have you entered the #GetDiscoveredBackstage conte

Are you ready to flex your skills backstage at one